One of my favorite past times is creating ideas about how to help people travel Japan cheaply and yet reliably. The cheapest way to see Japan is to intern in our annual Japan Travel internship program. Japan Travel brings about 50 journalist interns from all over the world to cover the length and breadth of the country. We cover the intern's basic domestic travel and part of their accommodation costs. The program is really popular and we had over 1,500 applicants for the 2016 season (March through November).

But unless you're an aspiring journalist and wanting to spend your four weeks in Japan exploring a schedule of requests, then the next cheapest way to see the country is backpacking and hitchhiking. Yes, it is possible to hitchhike in Japan, although not many people do it. The general feedback is that Japanese are so unused to seeing hitchhikers – so, as long as the hitchhiker is well groomed, drivers will pick them up. To keep costs down, hitchhikers will either stay in hostel share rooms (many of these popping up all over Japan) or simply rough it outside in parks and the countryside. Sleeping outside is quite possible, although it's against local ordinances in many places and so you need to be discrete. Also, it's not so good for your grooming...! :-)

The problem with this bare bones form of travel is that unless you're a university student taking a "gap year" or an itinerant traveler, it's unpredictable. And, besides, just how do you find out where Tokyo's city limits end and thus where to find the best spot to stick your thumb out? (Actually, the answer is you need to get yourself to an expressway Service Area.) Instead, most inbound travelers have jobs or school to get back to, and they quickly learn from Booking.com that hotels in the most desirable destinations have to be scheduled/booked well in advance each summer or you risk not having anywhere to stay.

In my opinion, the best pre-planned low-cost way to travel in Japan boils down to either a JR Rail Pass and hostel rooms, or alternative modes of travel.

Looking at the JR Rail Pass and staying in hostel share rooms, if you're in Japan for about two weeks, you can expect a travel-and-stay budget of about JPY 349,000 for two people:

=> So that's about JPY12,465 per person per day - not too bad. The two things that stick out here are the cost of accommodation and the cost of transportation. So how can we reduce these?

One way is to combine them by renting a campervan, or more accurately "a van to camp in". Because fully outfitted campervans in Japan are rather expensive, running from about JPY 12,000/day for the one-box vans to JPY 45,000/day for the high-end vehicles.

Instead, it is much cheaper just to rent a one-box van and fit it out with a cheap foam mattress from Don Quijote. Based on current rental prices, this would mean:

You could cut that rental van cost further by buying a second hand van. But if you buy, then you have to sell it off again. And either action requires you to have a resident friend to oblige as the temporary owner, as well as having to do the tedious transfer paperwork.

We can also get the transport equation down by traveling by more unconventional means. For example, self-driving a "rent-a-dent" from a low-cost car rental company. Well-used rental cars used to be an anathema to the fastidious Japanese consumer, but as real wages have stagnated or fallen, young people in particular have become less fussy. So to service this segment, low cost rental car firms have been popping up. As an example of the surprising savings to be had, while a brandname rental car company charges an average JPY 5,000/day (JPY 70,000 for the 2 weeks) for a compact car, a "rent-a-dent" firm charges as little as JPY 2,150/day (average), or JPY 30,000 for the two weeks. No, you can't sleep two in a compact car, but you can certainly pack a tent or simply use hostels as mentioned previously.

Is it hard to navigate while driving as a non-Japanese speaker in Japan? Yes, if you're in the major cities, such as Tokyo, Osaka, Nagoya, and Fukuoka. But if you are planning to explore the more remote parts of Japan, there is no better way of getting around. Google Maps has come a long way and at medium levels of magnification in your location there is enough roman character translations of Japanese place names to be able to figure out where you are. So if you are looking to do a self-drive holiday in Japan, make a plan to pick up the car in a secondary city, catching a JR train from your arrival airport to get there.

The hands-down cheapest way to travel in Japan and get somewhere reasonably reliably, is by bicycle, hauling a few things in your backpack, while shipping two bags ahead to alternate destinations. This relay system of bags allows you to ride all day with minimum weight on your back, and when you arrive each evening at your hotel to have some warm clothes and toiletries waiting for you. I have mentioned this mode of traveling previously. How cheap is it? Well, once you get past the cost of buying the bike, your costs of traveling are almost zero -- well, less than JPY 2,000/week anyway (inner tubes and wear and tear). The great thing is that you can bring your bike to Japan with you, since most airlines offer a cheap international bike transport service.

Again, just like with a car, I recommend not trying to navigate your way out of a primary "gateway" city but rather to start off in a smaller secondary city. If you're arriving in Tokyo for example, I'd choose either Kamakura to the south or Nikko to the north as my launch pad. Getting out to these secondary starting points by rail can be absurdly cheap so long as you avoid JR. To get out to Nikko for example, you can buy a Tobu Spacia Express pass from Kita-senju to Nikko for JPY 2,900 one-way, or a slightly slower (3 hours instead of 2) regular train for just JPY 1,590 one-way.

How do you get your big-assed bike on the train? Well, you disassemble it, place it in a purpose-made JPY 3,500 bike bag and carry it on. These bags are freely available in bike stores all over Japan, or online. Once there, reassemble your bike(s), roll up the bike bag and strap it under your saddle, and off you go on your grand cycling tour.

In fact, I did just this over the last four days (I got back to Tokyo yesterday), riding about 200km from Nikko to Inawashiro Lake, up in Fukushima. More specifically, I caught the Tobu Spacia to Nikko, set up my bike outside Nikko station, rode over the hill to Kinugawa and stayed there the first night. The next day I rode up route 121 then along route 400 then route 30 until I got to Nasu Kogen, where I stayed for two nights. Finally, I pushed on to Inawashiro Lake, where I stayed for another night. If there is a pattern to this itinerary, it's that what I saved on the transport I spent on ryokan with onsen baths - daily physical punishment followed by heavenly luxury, a great way to savor each day!

Also, because the ryokan in Nasu and Inawashiro primarily serve skiers, another cost-saving tip is to know that these facilities drop their rates dramatically, by up to 2/3, in the mid-week summer season.

Is there a downside to traveling cheap (cycling, camping, or sleeping out) in Japan? Well, yes and no – depending on your point of view. Being outside does leave you very exposed to the elements, and on average it rains in Japan every couple of days. Also from October until March, it can also get really cold - snow for most of Honshu northwards. On the other hand, the environment outside the cities is wonderful. The mountains are clothed in verdant green or radiant reds and oranges, native birds chirp and sing as you pedal, old farmers work the fields and will wave as you pass by, and the sound of rustling trees and waterfalls is never far away. 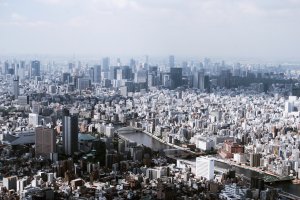 Lynda Hogan a year ago
What an incredible opportunity the Japan Travel Internship Program is. I hope it can come back "after" the pandemic.
Reply Show all 0 replies

Anonymous 6 years ago
I wish I knew how to take apart and put together my bicycle! Here is yet another way: rather than run around and try see it all, how about coming to Japan for a month or more, and choosing a destination or two, bypass the tourist Meccas and get familiar with one place, one host, life in Japan beyond bus tours, Hotels/hostels, and restaurants ...I suggest woofing. Check some of the small family run farms etc that match your interests, language skills .https://www.wwoofjapan.com/home/index.php?lang=en
Reply Show all 1 replies

Terrie Lloyd Author 6 years ago
For sure, if you have already been to Japan several times, I agree that "hubbing and spoking" out of a central location is a great idea. Airbnb and minshuku stays out in the country can be astounding cheap, and public transportation (mostly buses and local trains) in Japan is reasonable anywhere, although you have to hang around for infrequent service.
Reply

Frankie L 6 years ago
About transportation, I would avoid a two-week railpass for a two-week stay. Railpass is quite expensive and you'll probably not move that much everyday. I spent 4 weeks in Japan with a one week railpass : arrived at KIX, spent two weeks on local trains (oneway ticket from Kyoto to Nara is only JPY 710), then exchanged my railpass, spent one night in Hiroshima, by night train went up to Sapporo, spent a few nights there and back to Tokyo for the last week, leaved at Narita.
Reply Show all 1 replies

Terrie Lloyd Author 6 years ago
Do you know about Seishun 18 tickets? These are the best value JR rail tickets you can buy and work out at just JPY2,370 a day. They're available for use in spring, high summer, and early winter.
https://en.japantravel.com/tokyo/japan-rail-seishun-18-ticket/30167
Reply
5 comments in total