One thing that always grabs my attention is the variety of different sculptures in Japan. I’ve already mentioned such popular characters as tanuki and maneki neko that greet the store customers in a very nice way.

On my very first visit I was surprised by the presence of foxes at Shinto shrines because in various folk tales from where I am from, foxes often symbolise cunning or slyness. In those tales a fox will usually deceive and trick others to get what they want. But in Japan a fox, or kitsune, is a quite complicated character that lives a very long life. With age a kitsune will get five to nine tails and its fur turns white or silver. According to some Japanese legends, kitsune can light fires with its tail. To make things even more interesting, kitsune can turn into a beautiful and seductive young lady.

However, the sculptures of kitsune at Shinto shrines have just one tail. As the guardians, kitsune are often found at shrines dedicated to Inari, the god of rice and good crops that represent a good life. Inari has no visual image, but Inari shrines can be easily recognized as they’re coloured bright red or orange and have corridors of red torii gates. Perhaps the most impressive shrine dedicated to Inari is Fushimi Inari Taisha in Kyoto.

Kitsune sculptures vary by design and materials. They are made from stone, metal or wood and have different facial expressions - some are quite peaceful but some appear scary. Kitsune are often seen holding a ball or a key in their mouths. Apparently the ball is a symbol of integrity and fertility while in the Shinto faith the key s access to rice storage indicating a good life. So, in spite of their appearance, these kitsune bring fertility and prosperity.

People bring offerings to Inari shrines like small kitsune figurines or bottles and casks of sake. Sometimes you can see a red apron worn by kitsune - this is a manifestation of gratitude for help from above.

I took the enclosed shots from different shrines throughout Japan as they’re my favorite and I feel something special and personal from them. 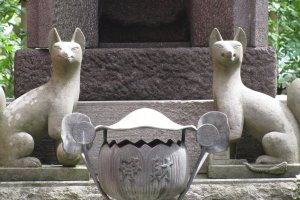 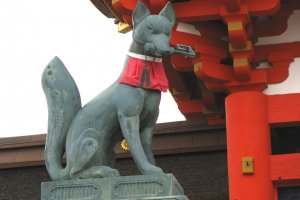 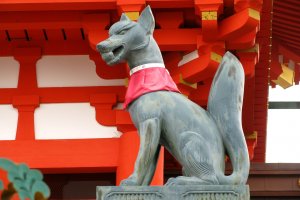 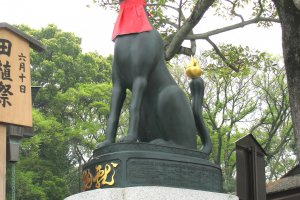 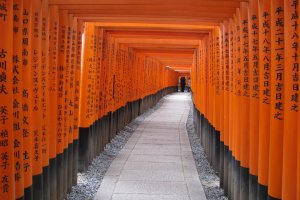 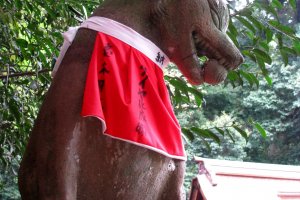 Lynda Hogan a year ago
We have some unusual guardians in Saitama. Shrines with frogs or wolf guardians. I am always on the look out for other guardians outside the norm.
Reply Show all 1 replies

Kim a year ago
Kitsune are some of my favorites to look out for, too!
Reply Show all 1 replies

Elena Lisina Author a year ago
My family name in English is Fox! In Russian it is 'lisa', and 'Lisina' is the same as 'fox's'. :D
Reply
4 comments in total