At the southernmost tip of Chiba prefecture along the coast of the Minamibōsō peninsula, the Nankaiso hotel resides in a spectacular, almost paradisiacal location. Shirahama and the Minamibōsō area have much to offer visitors from afar but sea views and fresh seafood are the main draws and Nankaiso provides both in bucket loads.

One of 59 properties run by the HMI Hojtel Group, Nankaiso proudly sits beside the ocean in close proximity to Nojimazaki Lighthouse. With Pacific Ocean views blessing all 99 rooms available at the hotel, the Nankaiso can also proudly boast of its spectacular seafood cuisine, laid out in buffet style in the main dining area.

Both Japanese, Western and combination Japanese-Western rooms are available, with their light wood furnishings and large windows with ocean views. Japanese style rooms come in several sizes (5-7 people), with Western options available including Twin, Family and Family Deluxe. Connecting and deluxe Western-syle rooms with large tatami areas are also available (up to 7 people), which might suit those in your group who want to experience Japanese tatami but not necessarily wish to sleep on futons.

The term 'buffet' is an understatement – what is on offer is a sheer feast of a banquet, with all tastes covered at Nankaiso's Hamayu restaurant. The real highlight is the fresh seafood: sushi, sashimi, shellfish and seasonal/local fish dishes all have their own dedicated sections at the buffet table.

Each guest is provided a table-top grill, with fresh abalone waiting to be cooked as I took a seat at the table. Rounding out this buffet, be reassured there are a lot of meat, vegetarian and fried dishes also available, with a teppanyaki chef frying fresh cuts of meat too. Plenty of soups, noodles and desserts are also available, with another section providing more basic options for younger guests.

Beyond this main dining area, a separate izakaya (Amagoya), karaoke bar (Amauta) and game centre are all located onsite. For those looking to relax, the public onsen is for you – an outdoor bath is also available depending on the season, as are massage services. A large souvenir shop is located on site for all your gift needs, which sits opposite the main lounge and a giant Ama diver artwork.

Given its commanding location, Nankaiso has a lot going for it. But if the fabulous views of Nojimazaki lighthouse aren't enough, why not swap perspectives and climb it?

It's just 101 steps and yields stunning views back over the coast, mountains and, of course, the Pacific Ocean. It's notable as only the second lighthouse to be built in Japan, back in 1869 during the Meiji period.

Nearby, don't miss a mysterious white bench on the craggy rocks overlooking the tide, to the south of the lighthouse – this is the Minami-Boso Shirahama Sunrise Point, which offers perfect uninterrupted views of the sunrise to the East and the sunset to the West, both from the same point. In fact the park grounds surrounding the lighthouse makes for a beautiful walk to help unwind.

The harbour area directly in front of the Nankaiso is also the location of the annual Ama Festival, held every summer in July. 'Ama' predominantly means 'woman shell diver' and describes the traditional practice of free-diving dating back almost 2,000 years.

Ama divers collected pearls but also sea fauna, such as shellfish and oysters. At the Ama Matsuri, you can witness over 100 women divers in white with torches swimming at night ('ama no yaei'), against a backdrop of a Bon festival dance, dragon dance, fireworks and lots more.

The area south of Tateyama is not well covered by JR's train network, so rental car, if not local buses, is recommended to travel around this part of Chiba.

At just a few hours drive Tokyo, it is easy to justify a trip down to the ocean calm of Shirahama, Minamibōsō, and the Nankaiso hotel is a great choice to consider staying at when you do. 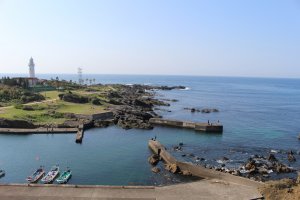 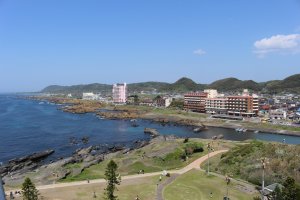 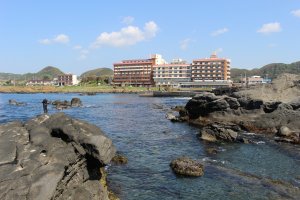 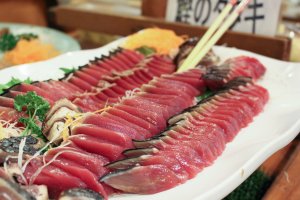 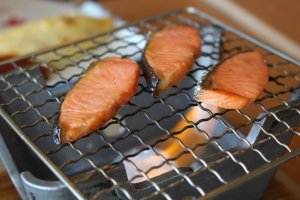 Thang Nguyen 5 years ago
while you are in a hotel you can look through a window and have some beautiful points of views about sea. I think of it and definitely I want a chance to stay at this pretty hotel.
Reply Show all 0 replies
1 comment in total