Ohara Hadaka Matsuri is an annual ‘Naked Man Festival’ that takes place in Isumi City, Chiba. Loincloth-clad men carry portable mikoshi shrines into the sea as part of the city’s autumn celebration and prayers for a good harvest. The boisterous festival ends with light-up displays, singing, dancing, and fireworks.

Ohara Hadaka Matsuri, Isumi City’s annual autumn harvest festival, dates back to the Edo period. In the past, there was no other form of entertainment for the locals. Thus, the festival was one of the main events to bring people together and boost morale. The Ohara Hadaka Festival used to take place from August 13 to 15 but has since shifted to occur in late September. Now, the event marks the beginning of autumn where locals celebrate and pray for a bountiful harvest and catch for the rest of the year.

The festivities begin in the morning, where mikoshi (portable shrines) are carried around town by “naked men”. Despite being called a Naked Man Festival, it is perhaps more appropriate to call the groups of local men ‘barely clothed’, as they don a white loincloth.

Visitors are recommended to be at Ohara Port by 1 pm to watch the famous shiofumi. Shiofumi is when the mikoshi carriers bring it into the ocean at Ohara Beach. Both the participants and viewers revel in the excitable atmosphere, where the mikoshi-carriers shout and cheer during shiofumi. In the evening, it is time for Owakareshiki — saying farewell to the gods. During this, the mikoshi are carried around the streets and eventually brought to the schoolyard of Ohara Elementary School. When the sun sets, portable lanterns are lit and carried along with the mikoshi, adding a mystical orangey glow to the nighttime festivities.

The festival is brought to a close with a brilliant fireworks display, while the festival-goers sing and dance, welcoming the start of autumn. 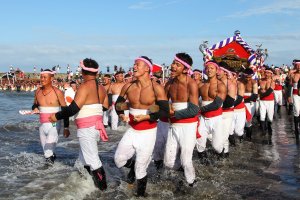 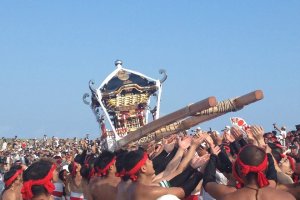