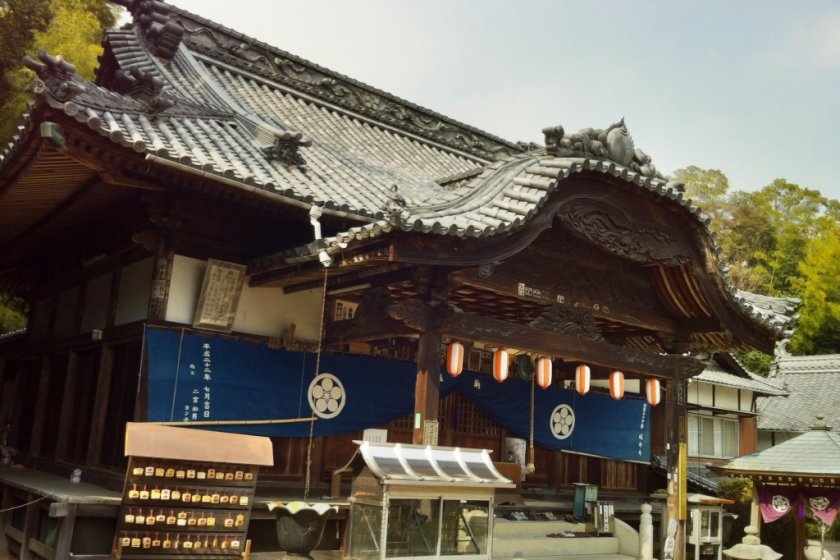 Temple No. 54 of the Shikoku 88 temple pilgrimage

Enmei-ji, No. 54 of the Shikoku 88 temple pilgrimage

Enmei-ji in Imabari is Temple No. 54 of the Shikoku 88 temple pilgrimage. Apparently this temple used to be called “Enmyo-ji”, the very same name as No. 53 located in Matsuyama. It changed its name in the Meiji period.

To get to Enmei-ji, you pass some untidy, semi-abandoned commercial premises, which makes an unpromising start. Nonetheless, Japan has lots of these, so it should come as no surprise that you would find a nice temple once you get past them. You must further negotiate a very narrow road past a lake. When you arrive at the car park, you find yourself surrounded by graveyards. Enmei-ji is unusual in having two bell towers, one inside and one outside the temple precinct. I went up the hillock to check out the bell tower in the car park, and found a stand of tall, pointed gravestones. These pointed stones are military graves from World War II. From here there’s a good view of the temple and its rather spectacular tiled roof.

As you approach the Hondo or main hall, you can’t help but notice a wonderful flaming turnip over the porch, rendered in gray tile. On the ridge of the roof there’s also some very elegant foliage and a symbol with several circles which represents the sakura or cherry blossom. Outside the Hondo, a group of shoes were arranged in neat rows and the old pilgrims who owned them were chanting a sutra inside. It was an agreeable sound, like a well-practiced chorus.

Every temple on Shikoku’s pilgrimage route has a building called the Daishi-do to venerate Kobo Daishi, the founder of the pilgrimage. The one at Enmei-ji is up a flight stone steps, which is another unusual feature.

In front of the main hall, you can find a small statue of the Buddha surrounded by little green babies who look like praying fetuses. As I was wondering if they were there for fertility or for the opposite, the priest of Enmei-ji emerged from his house. It seemed like a good opportunity to ask some questions. I asked about the babies. The priest is a portly gentleman. Gesturing significantly over his own rather distended belly, he explained with a flushing movement of the hands that in ‘unavoidable circumstances’, babies must be aborted, and the Buddha was ready to receive their souls at Enmei-ji. I asked about the turnip on the roof. That apparently represents a halo, or the burning spirit of the dharma.

As I left, the priest was ringing the temple bell. He paused in prayer for nearly a minute between each chime, and the lady in the souvenir shop paused in her commercial activities and sat with her hands pressed together and her eyes tightly closed. 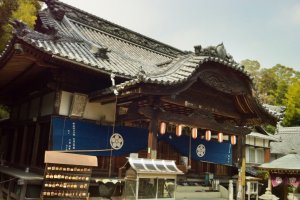 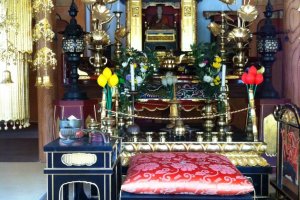 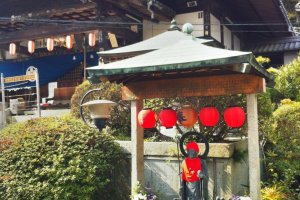