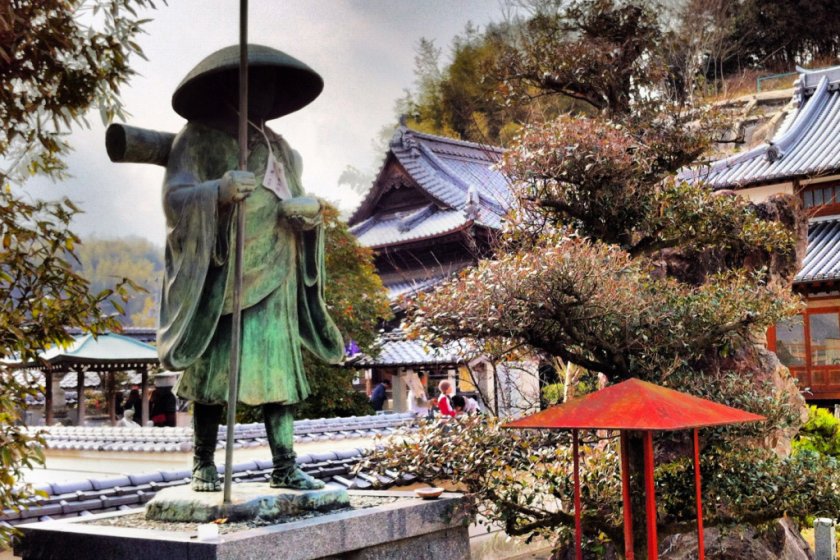 Temple No. 56 of the Shikoku 88 temple pilgrimage

Taisan-ji is Temple No. 56 of the Shikoku 88 temple pilgrimage. In Matsuyama, there’s another temple called Taisan-ji, although the kanji (Chinese characters) are different. The temple in Matsuyama means “big mountain” while the one in Imabari means “peace mountain”. A central tenet of Buddhism is that “things change”, and so has the name of Taisan-ji. It used to refer to “easy birth”, and so women still come here to pray for easy delivery.

But enough of names. What is it actually like to visit Taisan-ji? I went there late on a cold spring afternoon, and my impression of the temple was of almost unremitting bleakness. I parked in the flat, graveled car park and gazed up towards the temple. What immediately caught my eye was an extremely ugly concrete retaining wall with big, criss-cross vein-like structures bulging out between two temple buildings. Japan has a good deal of this sort of thing blighting the landscape, but it’s unusual to see it at a temple. It doesn’t do much for the atmosphere.

I made my way down an alleyway past a shop selling fruit and a little shrine decorated with a broken plastic doll. The lady selling fruit greeted me like an old friend, which was the highlight of my visit.

Taisan-ji stands on a platform constructed of massive stones reminiscent of castle walls. Apart from an obviously old section, these walls are new, and stark looking. On top of this platform is a hodgepodge of new and old buildings arranged in a row. There are a few nice pines and flowering trees—a weeping plum which was in glorious pink bloom and some camellias, the prefectural flower of Ehime. Every temple on Shikoku’s pilgrimage route has a building called the Daishi-do to venerate Kobo Daishi, the founder of the pilgrimage. The one at Taisan-ji is unremarkable.

The central wooden building holds some very dramatic Nio guardian statues who once stood in a now defunct gate. You have to press your nose to the glass to get a good look at them, but they’re worth it.

Taisan-ji is one of six pilgrimage temples located relatively close together in Imabari. The others are Eifuku-ji, Enmei-ji, Nankobo, Kokubun-ji, and Senyu-ji. Unfortunately, there’s nothing much to recommend Taisan-ji except as a stop on the pilgrimage trail, and so unless you need to go there to make up the numbers, I’d suggest that you give it a miss. Of course if you’ve skipped the birthing classes and are looking for some last-minute help with delivery, it could be worth a visit. 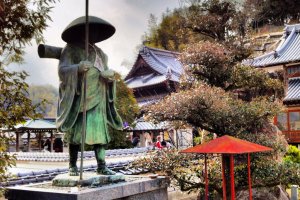 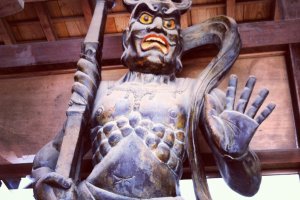 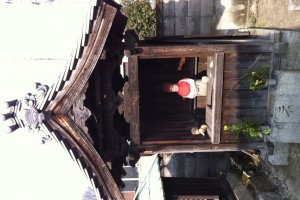