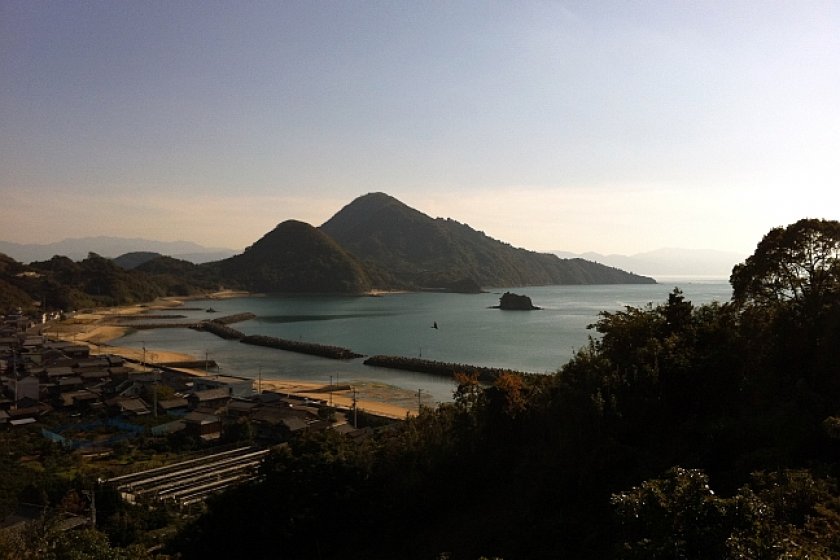 Go to Gogoshima where the birds are

Hawk rising above the bay

Gogoshima is the island that sits nearest the coastline of Matsuyama, dominating the skyline with its mountain Kofujiyama (little Mt. Fuji). Ferries ply regularly between Takahama port in Matsuyama and on Gogoshima, Tomari and Yura ports. The ferry trip to either port takes only about 15 minutes, so it’s a trivial matter to hop over to the island.

I visited Gogoshima in late November when the hills were full of the sweet, vanilla perfume of the autumn-flowering biwa fruit (loquat). The various types of citrus were also ripening on the low, dark green trees, creating a very colorful scene. In the autumn sun, the sea was a deep turquoise. I cycled to Takahama port, wheeled my bicycle onto the ferry, and rode around the island from Yura to Tomari. When I arrived at the port, a crusty old gentleman who was taking his ease on the dock ambled over and explained what I should see and do on Gogoshima. I must take in the Iwakami Shrine, “A good place, that”. Apparently, the island also has a pilgrimage route of 88 temples and shrines, just like Shikoku, and I should see those. Finally, I was advised to take the boat back from Tomari because it was nearer to Matsuyama (by all of about five minutes).

I did my best to follow the advice, but however hard I looked, I couldn’t find the shrine of good repute. I did however see a good many other shrines and temples, also a shockingly large number of the tall, pointed gravestones that mark the burial sites of men who died in WWII. It’s hard now to imagine how populous the island must have been in those days to have sent so many off to die.

At the south end of the island sits Kofujiyama. Whoever named it displayed a stunning lack of originality, imagination, and good eyesight, because the mountain looks nothing like the famous Mt. Fuji. Nevertheless, it’s an easy two-hour walk up and down with rewarding views from the top, to Matsuyama and the coastline of Ehime on one side, and the islands of the Seto Inland Sea on the other. It also looks very attractive from various angles as you go around the island.

Gogoshima has a number of pretty, sandy beaches, some of which are quite isolated. Those located nearer the roads have stalls in summer selling ice cream, beer and snacks, with shaded tables. But even in November, it was pleasant to sit on the beach and watch the many kinds of birds. Besides a variety of gulls, I saw fishing birds such as herons and cormorants, and birds of prey including buzzards and hawks. In fact I saw so many birds I’ve never seen before, I wished I had gone prepared with a field guide and binoculars.

The island doesn’t actually have any restaurants, nor does it have many shops. I might have died of starvation if I hadn’t encountered a van that sold me some very good bread from Panette in Matsuyama. If you’re planning to stray far from Tomari, you should get something to put in your bag before you go. 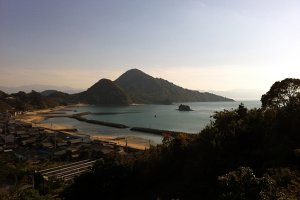 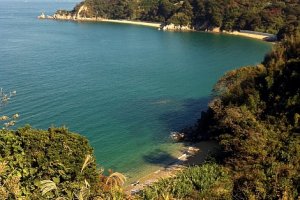 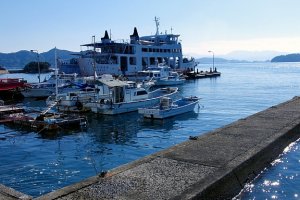 JapanTravel Guest Author 9 years ago
Gogoshima is popular with people who like to fish, and I did see a minshuku lodging house facing that rather stunning bay you see in the top photo. It's funny you should mention buying land there - I thought the same thing. I'm sure you can.
Reply Show all 0 replies

larrybird 9 years ago
Oliver Stadler has written a great book on the entire pilgrimage called (surprisingly) "Pilgrimage." Highly recommended. Your photos and comments looks at it all from a different point of view. And YES, when I go, I will remember to bring along some food!
Reply Show all 0 replies

JapanTravel Guest 9 years ago
Darn, another pilgrimage place to think of going to see. Rod, is there somewhere to stay on the island? Sounds like a perfect place to set up a spa -- actually... Can you buy land there?
Reply Show all 0 replies

Wouter Thielen 9 years ago
Beautiful pictures! I am curious what the island looks like during autumn season, when the leaves are in full colors. Would be great if someone could post them up!
Reply Show all 0 replies
4 comments in total