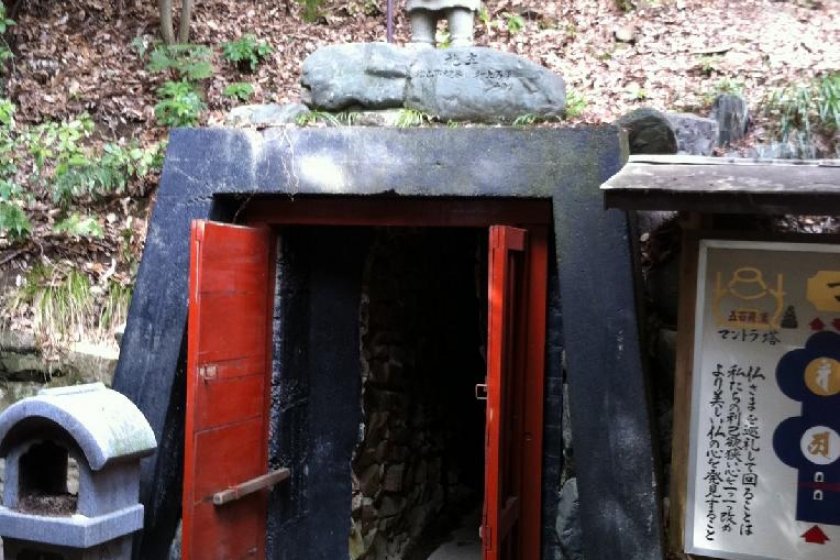 No.51 of the Shikoku 88 temple pilgrimage

Although no guidebook will come out and say this, Ishite Temple is a weird place. Ishite-ji, as it's known in Japanese, is No. 51 of the 88 temples that form the Shikoku Pilgrimage, and you can usually see a few pilgrims in their white garb and cone hats making their way on foot to the temple. Or getting the bus there as the case may be.

Right from the entrance on an otherwise unremarkable street, there are indications that this temple is not quite like any other. The baroque stone dragon for example. Ishite has a number of conventional temples buildings, including the Niomon Gate, a designated national treasure. The main hall and pagoda are also designated important cultural properties, in the architectural style of the Kamakura Period (1192-1333). These are often wreathed in smoke from a vast bronze urn full of ashes from incense. Believers buy bundles of the incense and 'bathe' in it as if showering.

But normal temple practices and architecture aside, everywhere you look there are weird statues. These include masses of gnome-like wooden statues, carved by a local man to represent the multifarious followers of Buddha, and some very unkempt plaster and wire creations that are not aging gracefully. But as these rot and fall apart, perhaps ironically, they represent the ever-changing nature of reality, which is an aspect that Japanese Buddhism typically likes to sweep under the carpet.

Behind the nationally recognized temple buildings is a doorway to a dark hole in the mountain which forms the backdrop to Ishite. Entering this narrow hole, the visitor is immediately forced to choose between going straight up a slight incline, or heading off to the right. Going straight up, you're guided in the dark by some crudely hung electric lights and Buddhas arranged like bollards. More weird statuary looms up in the dark, and off to the right and left are alcoves full of very creepy statues festooned with cobwebs and votive string. It's quite cold in the tunnels, but half-seeing some of these things in the gloom will lower your temperature another few degrees.

When you come out of the tunnel, there's another strange complex that includes a rotunda filled with row upon row of the Buddha's followers, and a large statue of the Buddha meditating in his self-abnegating phase. He's fairly skeletal. When I went, a beautiful cockerel was strutting around the grounds. The view from the hill behind Ishite-ji is well worth the short walk.

On a hillside above Ishite-ji stands a huge statue of a shaven-headed man holding a brush. This is Kobo Daishi, a major figure in Japanese Buddhism and a writer. I wanted to climb up for a closer look, so I asked a man who had a pigeon on a leash wreathed with Hawaiian-style garlands how to get up there (I'm not making this up!). He told me a complete fib, but I got up to the statue anyway. There are no views from here, but you can look up the nostrils of the statue.

I went back down through the tunnel and took the left turn. Here there are murals and cabinets representing in miniature the 88 temples of the Shikoku Pilgrimage. More unbelievable strangeness. Unless you have some means of generating light, you can't actually see most of it.

The grounds of Ishite-ji include a number of museums which are worth visiting. There are also two ancient stone tombs (kofun) that you can enter. Although the temple is just a short distance from Dogo, it's often overlooked by overseas visitors, but it's well worth a full afternoon. Take a torch. From it’s capacity to instill a sense of mystery and awe in visitors, Ishite-ji deserves its place as one of Ehime’s main “power spots”. 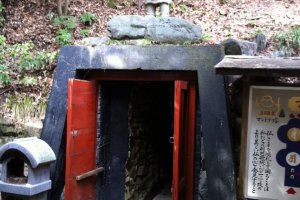 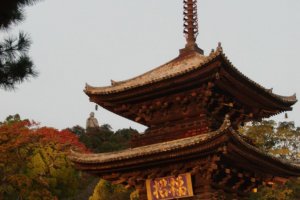 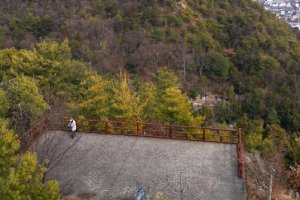 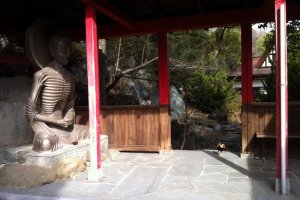 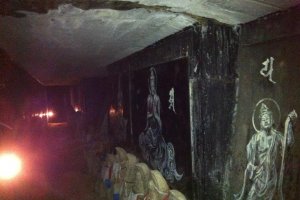 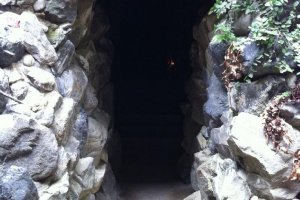 Elizabeth S a year ago
This is the most memorable temple from my time on Shikoku. The origin of the temple, the stone in the hand of a newborn, is just the beginning of the eerie atmosphere of this temple. The rotunda/grotto of the emaciated Buddha and his followers is startling. On one of my visits, there were little puppets and ritual figures set up on the veranda of the temple for an anniversary festival. It's peculiar.
Reply Show all 0 replies

Tony Mariani 7 years ago
I had a chance to visit this temple during my first visit to Matsuyama. It was during a holy day and it was crowded with people enjoying the holy day celebration. Incense was burned in offerings and priests were there to write prayers on prayer sticks that were burnt in offerings. Among the many Buddhist priests were firemen so the bonfire of prayer sticks would not get out of control. It was a memorable visit. The Mayor and city council wore traditional Samurai garb over their suits and tossed out rice cakes to the crowd. The crowd went nuts for them as it is good luck to get them.
Reply Show all 0 replies
2 comments in total