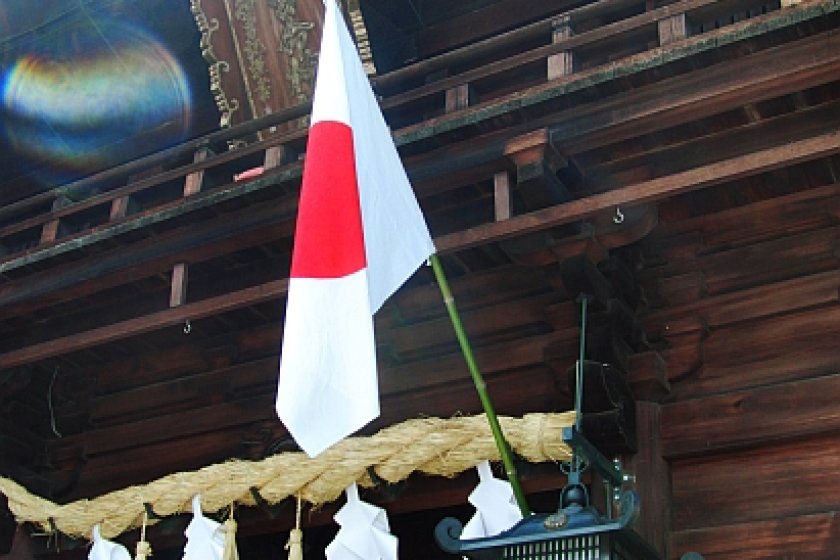 Tsubaki Shrine is located south of central Matsuyama, just off the busy road to Tobe. Turn off to the right and the scenery suddenly becomes a little more rural, and away in the distance can be seen an imposing edifice, surrounded by trees and framed by two huge torii gates. The first view of a grand shrine always creates a thrill of excitement and anticipation, which grows as you approach.

Shinto shrines are intended to purify worshipers through communion with nature, but in the city, this can be a challenge because often there’s precious little nature to work with. In many cities, this means a few large trees are planted in the shrine grounds, making it a blessed sanctuary for both people and animals who long for some greenery. Fortunately, Matsuyama is a quite a green city, and the rich foliage of mature trees surrounding Tsubaki Shrine is not an unusual sight here.

I visited on a national holiday, so the Hinomaru was much in evidence, with two large flags attached to the impressive gateway billowing in the strong wind before an autumn typhoon. Most Japanese people may not be able to articulate what Shinto consists of exactly, but many Japanese are quite attached to Shinto ritual. One such ritual is the presentation of newborn babies at the local shrine. A young mother in hot pants and high heels was there with a tiny babe in swaddling clothes, accompanied by husband and mother-in-law, to have the shrine drum banged and the prayer stick waved over the little child. This simple baptism was performed in the depths of the shrine, resplendent with wood paneling and gilt fittings, with a pleasant breeze blowing in from the open sides.

Shrines are also communal spaces, and Tsubaki Shrine has a large modern hall hidden from the main shrine buildings by trees. Drawn by the sound of some very raucous enka singing and loud clapping, I entered the hall to find a banquet in full swing, with nobody under 70 years old. The music was accompanying a ribald performance of old people dressed up as cats, decorated with silver tinsel. From a Shinto perspective, this is quite natural behavior, and because shrines are meant to promote human joy, a bacchanal on the shrine precincts is perfectly appropriate.

Tsubaki Shrine is a good example of the large, urban shrine, and if you find yourself in Matsuyama in time for a large Shinto event like New Year, or Setsubun, you’ll witness the genuine Shinto piety of large masses of local people. 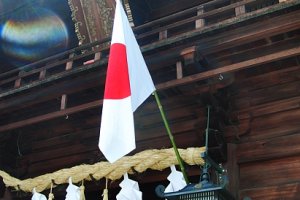 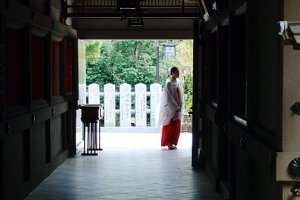 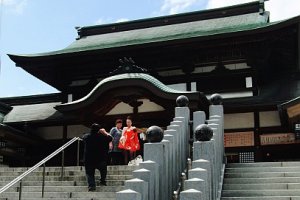