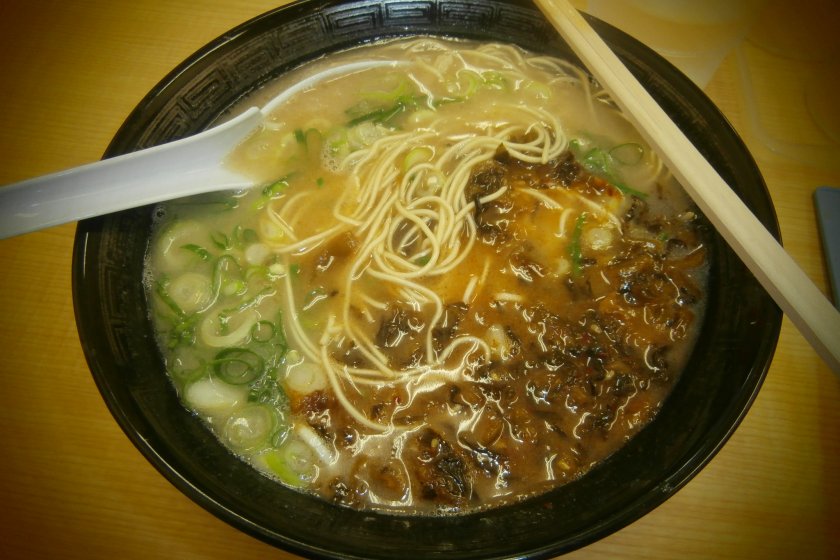 One of the best bowls of ramen you'll ever taste

I had Nagahama ramen with spicy wild vegetables

Fukuoka is famous for delicious food, especially ramen. I am pretty sure many of you are ramen fans. If you’re planning on visiting Japan to taste the best bowl of delight ever, you will be missing out if you don’t stop by Fukuoka.

Nagahama ramen is a popular type of ramen in Fukuoka, and nowadays it is considered the same thing as Hakata ramen, although originally they were different. Basically both kinds have a tonkotsu (pork and bones) based soup, which looks milky-white, and very thin noodles. Two distinguishing characteristics of these similar ramen types are that you get to order what stiffness you want your noodles to be and that you can get a second serving of just the noodles.

However, Nagahama ramen in particular is known to be the ramen they serve in restaurants and yatais (food stands) in the Nagahama area in central Fukuoka City. Being a port and a huge fish market, Nagahama made ramen originally for the participants of the market to eat in between auctions, and that’s why they use super thin noodles that don’t take much time to boil. The tonkotsu-based soup is relatively light regarding the fact that it is made out of pork meat and bones. On the table, they normally they have ramen sauce, red pickled ginger, pepper, and sesame so you can arrange your ramen the way you like it.

So you may be wondering, out of all the ramen shops in Nagahama, which restaurant or yatai serves the best Nagahama ramen? Honestly, that depends on the person, but I guess I should give you some idea, so I will introduce you to the Nagahama ramen eatery I’ve heard is most loved by the local gourmets.

The restaurant I visited was Nagahama Number One (長浜ナンバーワン). They are actually famous for their yatai (they have both a restaurant and a yatai), but unfortunately when I went to check that one out, it wasn’t open yet. They usually open around 7:30pm, and especially during the weekends, long lines form in front of the small stand. Since I was extremely hungry and couldn’t wait for another hour to have my supper, I decided to go to the restaurant instead. Interestingly, the eatery and the yatai are very near each other. As I had my Nagahama ramen, I noticed how different the ramen is compared to the tonkotsu-based ramen I have in Tokyo–usually I get tired of the taste after eating half of the bowl, but for this Nagahama ramen I had that feeling never occurred. The lightness of the pork-based soup was just perfect, with the richness of pork still spreading in your mouth. Adding some pepper made the ramen my own personal bowl of happiness.

Although the yatai version of Nagahama Number One has a higher reputation, this eatery is good enough to make all extreme ramen lovers gratified. But if you are hardcore enough, wait in line outside and try the yatai for sure, and it will be a life-changing experience for you. 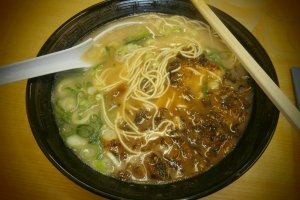 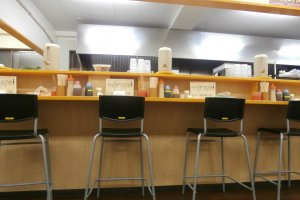 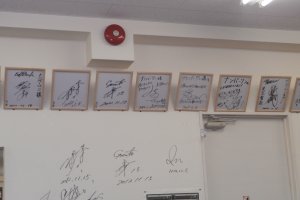