A Daytrip in Aizu

The train trip to Aizu brings you through the mountains and farmlands that symbolise the landscape of rural Japan. Once you get off at Aizu-Wakamatsu station the feeling is one of a small residential town. Here everything has a slower pace, though on closer inspection, multiple layers of rich history and culture can be found.

Aizu is well known for its castle and for the award-winning sake breweries. Furthermore it has a long samurai tradition that goes back in the centuries. Despite first impressions, this town has several considerable sites that are worth a visit. if you are travelling through Tohoku, it will easily fit in your itinerary as a good day trip. The most popular attraction is, undeniably, the Tsuruga castle, home of the last Samurai and female warriors of feudal Japan and celebrated in the Autumn Festival from 23 to 25 September. The original building was destroyed during the famous Boshin war in 1868. Even though the main tower would be a fearsome sight to an invader, it is surrounded by cherry trees and finely-kept gardens. The thick traditional walls of dark rocks frame the wide inner courtyard into a well-balanced composition. Moreover, you can visit the museum and climb up to the top terrace to get a 360-degrees view over the whole city and the surrounding mountains.

Your next stop should be the Suehiro Sake Brewery. Founded in 1850, this family business is awarded every year for its high quality products. They have a free Japanese language tour of the factory that culminates with a free tasting. There is a shop as well, where you can buy sake of every kind, from the classic to the most fancy and unconventional, like the sparkling one. Before leaving don't miss the opportunity to taste one of the sake-based sweets in the brewery café next to the entrance.

A bit farther away from the center, but easily reachable by bus, is Higashiyama onsen. This tiny village hidden in a narrow valley can be a good option to stay overnight if you wish to stop longer. Here you can find several onsen ryokan and a couple of big modern hotels. As usually, in onsen towns like this the real attractions are the lodgings themselves.

Last but not least is Iimoriyama hill, the history of which is known all over Japan. In 1867 the fall of the shogun Tokugawa marked the beginning of the modern era, also known as Meiji restoration. Short thereafter, the Boshin war started between the Emperor's army and the last groups of resistance against the modernisation. The climax and consequent end happened with the conquest of Tsuruga castle in 1868. Right before, when the battle was still going on, a group of Aizu soldiers known as Byakkotai or White Tigers Corps was on this hill and saw the castle burning. At that sight, with their army defeated, they decided to commit the seppuku or ritual suicide. The flames were actually outside the walls and the battle was not over yet but, still, this act of extreme loyalty and courage became well-known all over the country. On the hill you will find the usual souvenir shops and restaurants and a small temple on top of a long stairway. There is also a rare three stories pagoda called Sazaedo with a spiral staircase inside that guides you to the top.

After the long day, before walking your way back down, take your time to admire the sunset over the below city. There is actually another location you should visit, the Nishinkan. This samurai school reconstruction is located a bit outside the city and it's easily accessible by car or taxi, though the bus is pretty infrequent. The tour shows the rituals that the apprentices had to do everyday, from studying the teachings of Confucius to practising martial arts. The gardens between the various buildings create a beautiful view and the quiet atmosphere is very pleasant. If you feel like you can even try archery using the long-style bow the young students where using. Furthermore, on the way, you can make a brief stop at Aizumura park where there is a huge 57 metre statue of Kannon towering over the area.

The easiest way to visit the city is using the tourist bus from the main station. The service goes on a loop and stops by all the major sites. 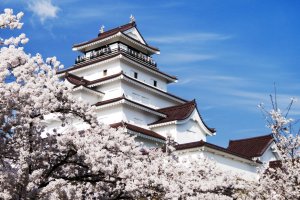 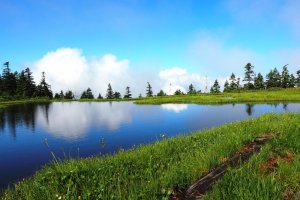 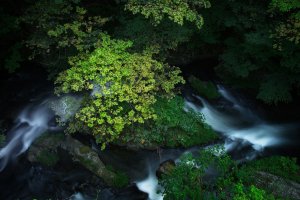 Elena Lisina 3 years ago
I'd like to visit Aizu next time. Thanks for the information!
Reply Show all 0 replies

Elizabeth S 3 years ago
Higashiyama onsen village is a lovely place to stay. Two of the onsen welcome guests to walk between them to luxuriate in their different baths with gorgeous views.
Reply Show all 1 replies

Sandro Bernardinello Author 3 years ago
Thanks for the info Elizabeth! :)
Reply

Kim 4 years ago
Fantastic as always! May I ask what camera you use? You always take such lovely pictures!
Reply Show all 3 replies

Sandro Bernardinello Author 4 years ago
Hi Kim! You are really too kind!
I've used a Canon 7D for years but I've switched to Nikon (D810) about half year ago.
If you have a minute and you'd like to, you can go to my website, https://www.sandrobernardinello.com/ , you can find some stuff there, not everything at all but I'm working on it. :)
Reply

Kim 4 years ago
Just checking it now - the pictures you have on there are incredible and the website looks great! You have a gift!
Reply

Sandro Bernardinello Author 4 years ago
I'm very happy you like them! Kim you are way too kind :) Thank you very much!!
Reply
7 comments in total