A ride on the wild side

It was the weekend and time for another adventure. This time I checked out the Tohoku Safari Park (東北サファリパーク) in Nihonmatsu, Fukushima Park to see the animals strut their stuff from the comfort of a motor vehicle.

After checking in and paying your entrance fee at a drive thru like toll area, drive up a narrow road heading towards the main safari park entrance. On your way are a few animals in cages which are hard to see because of the layout and tall grass. Not a great first impression. The road opens up to a large parking lot where there are a few animals in pens, an elephant you can ride (separate fee), restaurant, and rest area. This is also a place to rent cars for 1500 yen. Some people come via a 20 minute bus ride from Nihonmatsu Station while others swap out their own car to avoid getting it dirty. The older looking rental cars looked like they had been through many safari adventures, but they were mostly clean and I saw no claw or bite marks on the exterior. Still, I was a little anxious as the first exhibit hosts the white lions.

Driving through a two gate security checkpoint, my passenger and I drove slowly up the path towards a plateau. There are few trees and mostly just tall brown grasses--perfect for predators to hide. With a sudden turn to reach the top of the ridge, we were shocked to find a pride of lions lounging right along the road. The white lions are absolutely majestic and powerful creatures which demand respect as I was to soon find out. I leaned towards the securely shut window to get a close up picture. Two of the female lions seemed interested in our car's engine which had a slight rumble to it. Before I could drive away they had parked themselves in front of the car!! A serious game of cat-and-mouse continued for five minutes. It involved me backing my car up (and making the family in the car behind me very confused and angry) then driving at a slight acceleration forward past the lions again. One of them trotted alongside. It would have been magical if it were any other animal as this one could easily crush the car if it wanted to. I was scolded at later on by staff because they said I should have not slowed down to take pictures. Remember that captive animal does not equal tame animal. After my heroic escape, we headed to the main compound.

What happened next was 20 minutes of childhood wonder accented with young adolescent giggles, despite our fully adult ages. Goats, camels, giraffes, an elephant, donkeys, sheep, zebras, and miniature ponies and more call the safari park home. We were their guests and certainly received a warm welcome! As soon as the gate closed behind our car, we were assaulted with cuteness. In this area you can slow down your car or even make several stops along the wide road to take in the living nature around you. While you could have bought food to give the animals for 1000 yen at the entrance, I would not recommend it. Besides the extra cost, most animals think you have food already so will happily come face to face with every single car. It makes for some fun pictures. The course in this area is set, but you control your length by your pace. I saw one speedy family finish in less than ten minutes, while I soaked in everything with a leisurely twenty two. If you want to enjoy even more animals, there is a sea lion show and flamingo area, each a separate charge. There is also a terrifying, un-staffed and admission free dinosaur museum on premises; the exhibits take you back to a time lost in history--I would say the 1980s.

Overall I thought the Tohoku Safari Park was an interesting, worthwhile experience. With a well-marked route from the closest station, and a small onsite hotel and rental car options, getting to and enjoying the park is easy. Some animals were in cages and it was depressing but unfortunately the norms in some Asian zoos. The white lions were cool though they tried to kill me. Meanwhile, I think the delightful memories of getting face to face with several animals justifies a special trip if you have not experienced something like this before. See some of my close encounters with the animals here. 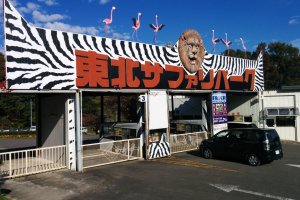 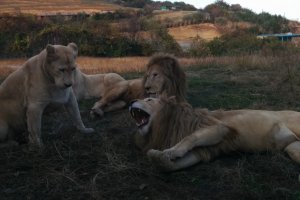 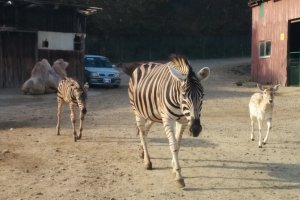 Kim 4 weeks ago
This is cool! I've been to the one in Gunma, but not this one.
Reply Show all 0 replies

Elena Lisina 5 years ago
I like animals! Is that safari park only for driving inside? If I can't drive, visiting that park is impossible?
Reply Show all 2 replies

Justin Velgus Author 5 years ago
Only cars are permitted, except for the occasional tour group that get on big animal buses. However, those tours drive way too fast. I went through slowly, letting many cars pass. So, if you don't have someone able to drive in your group, waiting and asking cars at the entrance could be a good way to make friends and get inside!
Reply

Elena Lisina 5 years ago
I see! Thank you, Justin! Is it allowed to open windows of a car or not?
Reply
4 comments in total