There’s more than meets the eye

There are many tourist destinations in Hida region of Gifu such as the Gero hot springs, “Little Kyoto” in Hida-Takayama, and the UNESCO World Heritage Site of Shirakawago village. Compared to these tourist magnets, at first glance, it may seem like there is nothing special in Maze. Located in the southern part of the Hida region, 95% of this area is covered in forests of cedar and cypress. It is said that there are more deer, bears, and boars than the human population of 1200. However, look no further than the 28km-long Maze River that flows through communities, rice paddies, and farm fields and you will find its ultimate source of bounty.

Regional industry relies on this crystal clear water to cultivate koshihikari rice, fruits, vegetables, and to raise Hida-beef. Not to mention, this turquoise-colored river is renowned for ayu (sweetfish) fishing, attracting up to 50,000 anglers every year. In Japan, ayu is the most popular freshwater fish and is considered a delicacy, especially when it reaches its peak season in the summer.

Ayu, highly-prized for its “watermelon-like” fragrance, eats moss on riverbed rocks. The fact that this fish can only live in exceptionally clean streams is a testament of how pristine the river and the surrounding forest is. However, this didn’t come without the effort of local residents. Since 1951, Maze has been hosting the National Ayu Fishing Competition annually around mid-June. After the event was held for the first time, the number of anglers increased drastically — so had the amount of litter. Thus members of fishermen’s union started a cleanup effort, which later spread among the villagers. Every year in since 1988, a day in June and August is allocated for all residents to come out and pick up litter. As a result, the quality of water is restored to the extent that it has been recognized several times by the government as one of the meisui (best water) in Japan. It has also been certified as a member of “The Most Beautiful Villages in Japan” since 2007.

Locals often say “there is nothing in Maze,” however, this is far from the truth. Not only is it home to the award-winning ayu, it is also a habitat for other freshwater fish such as amago (red-spotted trout), and iwana (char). There is also a facility for fish farming along the river. In terms of agriculture, the region produces various fruits and vegetables throughout the year. In the spring, wild vegetables such as butterbur sprout, mugwort, bracken, Aralia sprout, and ostrich fern can be collected from mountains. The bitterness of these spring vegetables is known to improve circulation and detoxify your body. Tomatoes, also known to help circulation, is harvested from July to September. They turn out extremely fruity because they are grown in highlands, where day and night temperatures change drastically. The same can be said about the sweet blueberries grown at an organic farm that is adjacent to a bee farm. All-you-can-eat blueberry picking and honey tasting can be enjoyed during the summer. Egoma (wild sesame), which has recently become popular among health buffs in the city, is a plant that is native to the Hida region. Its seeds taste surprisingly chocolaty when made into a paste, but it is more than a guilt-free way to satisfy your sweet tooth. It is a super food that is rich in alpha-linolenic acid, which cannot be produced in the human body but is essential for health.

A Culinary Journey Through the Seasons

If there is one place in Maze that can do justice to the plethora of fresh ingredients provided by the river, mountains, and local farms, it would be none other than Maruhachi Ryokan. This traditional inn located near the Maze River invites guests on a culinary tour by carefully selecting the region’s seasonal foods and introducing them through sosaku ryori (creative cooking). If you visit during spring, a multi-course meal might feature steamed amago and rice wrapped in a cherry leaf, covered in thick clear sauce, and garnished with a sakura blossom and wasabi. In the summer, ayu is skewered in a way that it looks as though it was still swimming, sprinkled with sea salt, and grilled over open charcoal fire. This simple way of preparing allows you to appreciate its sweet fragrance coupled with the bitter flavor of its liver. Autumn dishes are highlighted by mushrooms and sweetfish with roe. Around winter when black-haired cattle are most rich in fat, Hida-gyu is served as steak. Its tenderness and juiciness ranks among the finest of Japan’s wagyu beef, and is truly a great example of quality over quantity. While the dishes may vary depending on when you visit, the joy is in appreciating the best of what each season has to offer.

For casual dining, there is Restaurant Mizube, which is all about providing hands-on cooking experience using local produce. Their lunch specialty is a regional comfort food called keichan, which means “chicken sauce.” Ladies wearing big smiles and red aprons prepare a pan that is filled with chunks of chicken and cabbage seasoned with garlic, homemade miso, and soy sauce. Guests are asked to stir fry the ingredients over a gas stove placed in the middle of dining tables. When ready, spoon it over a bowl of white rice, because the best part is the sauce, which will have you calling for a second bowl in no time. Side dishes like simmered taro glazed with egoma sauce, slow-cooked daikon radish with sweetened barley miso paste, and pickled turnip also pair very well with the locally produced rice. For a snack, there is goheimochi, which is another local favorite, made of mashed non-glutinous rice. Visitors get to use their own hands to stick the rice cakes on wooden skewers, shape them into an oval form, slather a paste of miso and/or egoma on both sides, and stick it on a charcoal brazier. When its surface becomes slightly crusty they are ready to be eaten. In the warmer seasons, you can dine al fresco right along the river. 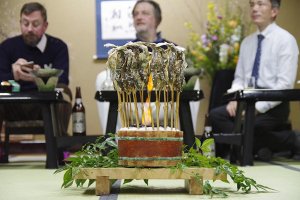 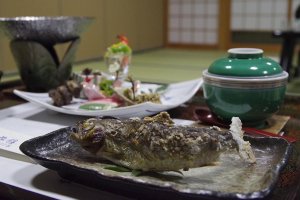 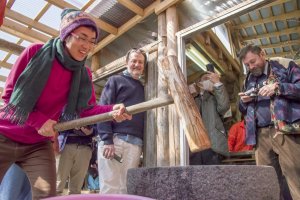 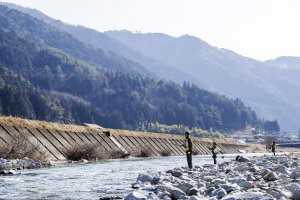 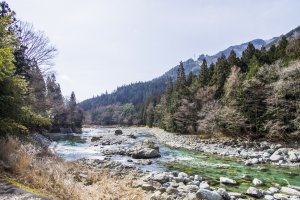