The final home to a feudal police force

The area of Hino City is famous for its world class zoo but is also known as the final resting place for many warriors who were members of the Tokugawa government special police force, Shinsengumi. The temples housing these people are fascinating places while others are recognised by the Tokyo government. Here is an introduction to some of the many temples to be found in Hino and how to reach them.

Established at the turn of the 17th century, Daishoji Temple is the final resting place of Shinsengumi supporter, Hikogoro Sato and his wife Nobu. The temple is also custodian to a religious document written by the temple's founder, Sanyo Shonin, which has now been registered as a cultural asset of Tokyo.

A 5-minute walk from Hino Station on the JR Chuo Line.

Like so many buildings in Japan, the 14th century-established Hosenji Temple was razed by fire before being eventually rebuilt. The temple is also the final resting place of Shinsengumi captain, Inoue Genzaburo while the grounds feature a bell tower, stone markers and a lovely sanmon entrance gate.

A 2-minute walk from Hino Station on the JR Chuo Line.

With its full name of Takahata Fudoson Kongoji, Kongoji Temple is a masterpiece of Buddhist architecture and design with a number of nationally recognised structures. A stunning 5-storied pagoda, a hydrangea-filled garden as well as some incredible views of the surrounding city make the temple a must-visit.

A 2-minute walk from Takahatafudo Station on the Keio Dobutsuen or Tama Monorail lines.

Seated amongst a small forest of trees can be found Soinji Temple. Its raised entrance profile gives the temple a touch of regal dignity to it and upon entering, it's easy to see why. The wood-toned brown and white colouring adds a unique ambience while the cemetery at the rear features rows upon rows of jizo statues.

A 5-minute walk from Hirayamajoshi-koen Station on the Keio Line. 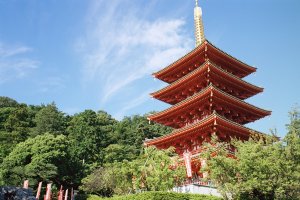 Kim a week ago
Kongoji is beautiful!
Reply Show all 1 replies

Sleiman Azizi Author a week ago
It really is. Another gem unknown by most visitors to Tokyo.
Reply
2 comments in total
Back to Contents