Sacred spring waters and the king of hell

A bedroom community that is far from sleepy, Inagi City is home to a score of temples and shrines that shine courtesy of their location. Surrounded by plenty of green, they feature cultural assets, festivals and sacred spring waters. Here is an introduction to some of the temples and shrines of Inagi and how to reach them.

A bit of a mystery as to when Aoi Shrine was first established, but the rather aged four komainu guardian statues do suggest a very long time ago. Set well back from its two torii gates, visitors to the shrine in early October will witness a traditional shishimai lion dance festival held in honour of the shrine's deity.

A 4-minute walk from Inagi-Naganuma Station on the JR Nambu Line.

Despite its location by the railway line, Anazawa Tenjin Shrine has a sense of isolation courtesy of its wooded surroundings. Within the shrine complex lies another, smaller shrine, dedicated to the deity Benzaiten, and which features an eerie little cave with sacred spring waters famous enough that up to 20 litres can be taken.

A 10-minute walk from Keio-yomiuri-land Station on the Keio Sagamihara Line.

The temple of statues, Jorakuji Temple is home to two Tangible Cultural Properties - a wooden triumvirate of Amida Nyorai with two attendants and a statue of Enma Zazo, the seated king of hell with a fiery countenance and crystal eyes. Outside the temple are scores of jizo statues, Buddhist kannon ones as well nio guardians in an elaborate entrance gate.

A 4-minute walk from Inagi Station on the Keio Sagamihara Line.

Another tick for the city, Myokenj Temple hosts the Momura no Hebiyori Gyoji every August. Registered as an Intangible Folk Cultural Property, the event was originally a plea to prevent the local rise and spread of disease. The temple itself features both a splendid gate and bell tower, all surrounded by plenty of greenery.

A 7-minute walk from Inagi Station on the Keio Sagamihara Line. 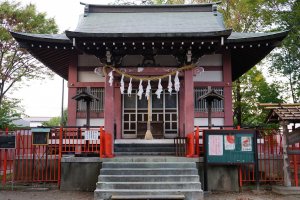 Kim 2 weeks ago
The lord of the underworld in one guide, and the king of hell in the next...I'm sensing a theme!
Reply Show all 1 replies

Sleiman Azizi Author 2 weeks ago
You've been bad!
Reply
2 comments in total
Back to Contents