Home to truly anything and everything

Wherever you go in Minato City Ward, you will come across something worth visiting. There's just that much here. From royal tombs to dizzying views, here is an introduction to just some of the many landmarks and historical spots of Minato and how to reach them.

One of thousands of similar royal ancient burial mounds found throughout the country, the Shiba Maruyama Kofun rests in the Japan's oldest public park and is mysteriously empty. A monument to Tokyo's long forgotten royalty, the 110m-long kofun keyhole shaped tomb is thought to date back to the 5th century.

A 5-minute walk from Hamamatsucho Station on the JR Yamanote Line.

Just outside Shimbashi Station sits an old 1945 steam engine. A hugely popular meeting spot, Steam Locomotive Square commemorates the century-plus history of the station and its lines. Evenings see the engine illuminated while at midday, 3pm and 6pm, the locomotive sounds its horn for a few seconds.

Direct access from Shimbashi Station on the JR Yamanote Line.

The extraordinary views from the indoor 52nd floor are only topped by the jaw-dropping vista to be had from the Mori Tower roof. Tokyo City View and Sky Deck may not have been the first observation decks in Tokyo but they are certainly some of its best. Coming with a JPY1800 and JPY500 admission fee, respectively, expect the best.

A 3-minute walk from Roppongi Station on either of the Hibiya or Toei Oedo lines.

Arguably the most iconic Tokyo landmark, Tokyo Tower has seen it all. The scene for scores of Japanese monster movies as well as a popular romantic meeting spot for couples, this communications & observations tower was once the tallest structure in the city and has dominated the skyline for decades.

A 6-minute walk from Kamiyacho Station on the Hibiya Line. 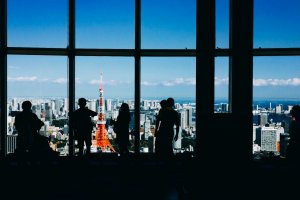 Kim 8 months ago
Anything and everything without a doubt!
Reply Show all 1 replies

Sleiman Azizi Author 8 months ago
Without a shread of it!
Reply

Elizabeth S 8 months ago
I find the Roppongi Hills complex fascinating and a landmark in its own right. With the garden and the winding passages and upscale shops, it's a place to explore. The year the tower opened I met some friends there to see the view from the sky deck. Stunning!
Reply Show all 1 replies

Sleiman Azizi Author 8 months ago
You're right,it definitely is its own destination and landmark.
Reply
4 comments in total
Back to Contents