Unassuming and very much residential, Nakano City Ward surprises with its places of interest. The ward's temples and shrines are a case in point. Decidedly local spaces complement more substantial locations while origin stories, ceremonies and intricate design details are all there for the visitor paying attention. Here we introduce some of the temples and shrines of Nakano and how to reach them.

The origin story of Baishoin Temple is a beauty, featuring miraculous spring waters, glittering plum trees and otherworldly eye healing magic. Among the many ceremonies held throughout the year, the temple's monthly Goma Fire ritual is a highlight while the statues of the Buddha of Healing surrounded by his twelve divine generals is particularly interesting.

A 5-minute walk from Araiyakushi-mae Station on the Seibu Shinjuku Line.

Established in the late-19th century, Ehara Fudo-do is Shingon Buddhist temple that, on first inspection, seems simple enough until you look off to the side. There, you'll find a small landscaped area highlighted by a rather dramatic and detailed rock diorama featuring stone carved deities including one riding a dragon.

A 4-minute walk from Shin-egota Station on the Toei Oedo Line.

Every October, a lion dance festival is held at Egota Hikawa Shrine in front of the shrine's kaguraden ceremonial music pavilion. Established in the mid-15th century, the shrine features a short procession of komainu guardian statues standing in silent sentry on either side of the path leading the shrine.

A 10-minute walk from Shin-egota Station on the Toei Oedo Line.

Hidden away amongst a small cluster of trees, lies the unassuming Shinmei Hikawa Shrine. A lovely little space perfectly suited for contemplation, the shrine was originally established in the mid-15th century. Its simple dignity is enhanced by some curious komainu guardian statues, with one older statue shown protecting its young cub.

A 10-minute walk from Nakano Fujimicho Station on the Marunouchi Line. 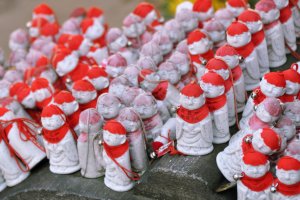 Bonson Lam a year ago
So much history and variety here. Do you have a favourite?
Reply Show all 2 replies

Sleiman Azizi Author a year ago
Baishoin is the main one in this list but I'm partial to the rock diorama of Ehara Fudo-do.
Reply

Bonson Lam a year ago
The rock diorama would be a real labour of love for the craftsmen who created it.
Reply

Lynda Hogan a year ago
Great to have a summary of the shrines and temples in the area in this handy guide. Thanks for sharing.
Reply Show all 1 replies

Sleiman Azizi Author a year ago
I love my work, lol
Reply
5 comments in total
Back to Contents