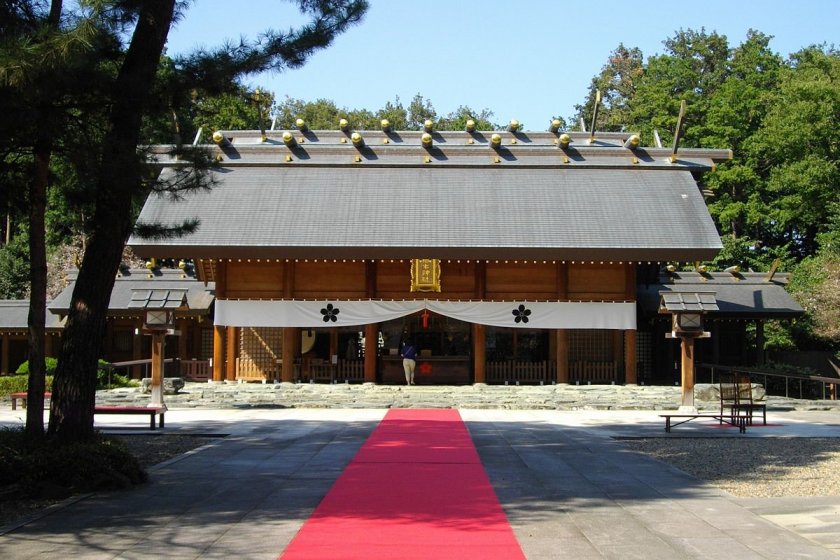 Chiba Prefecture's northern region, often referred to by its old district name, Higashi Katsushika, is today a suburb of Tokyo. It still retains a number of Shinto shrines that were destinations on the old Mito Kaido highway stretching from the old capital to the Mito Tokugawa stronghold at Mito Castle in Ibaraki Prefecture. On your visit to this region of Chiba Prefecture, stop by these photogenic shrines for goshuin stamps, novel enma votive plaques, and some beautiful scenery.

Noda City’s oldest shrine, Sakuragi Jinja, is notable for its autumn- and winter-blooming cherry trees. Any time of year, you are likely to see a display of pink blossoms. The shrine’s votive tablets in the shape of cherry blossoms are part of the attraction. Some of the quirks of the shrine are the flame-shaped spirit on the omamori amulets and a sub-shrine to ensure the holiness of the toilets on site.

In the center of Noda City is Atago Shrine, established over 1000 years ago, has a main sanctuary dating from the 1800s. The shrine is dedicated to the deity Kagu-tsuchi, who is propitiated to guard the city against fire. Take your time to gaze on the exquisite wood carvings, and let your children have a go at the ancient working well pump in the shrine’s front garden. On the north side of the shrine is a serene temple, a belfry, and a miniature version of the Shikoku 88 temple pilgrimage.

On the old Mito Kaido running through central Kashiwa City is Kashiwa Shrine. This shrine associated with Dewa Sanzan in Yamagata Prefecture was founded in the 17th century. The shrine is locally famous for its monthly rotation of goshuin stamps. Visitors can fish from a trough for their omikuji fortune in the courtyard.

When the Mito Kaido, connecting the capital Edo to Mito Castle to the northeast was constructed, the little post town of Matsudo became a significant stopover, and Matsudo Shrine was one of the highlights of the journey. This local shrine, accessed by a little bridge on the west side of Matsudo Station has had many historic visitors. Mito Komon once attempted to hunt a bird here, but offered a broken bow and arrow in tribute to the shrine deity. Astronaut Yamazaki Naoko received an omamori from the shrine, carried it on her mission aboard the space shuttle “Discovery”, and returned the amulet to the shrine.

Ohi Jinja, also known as Funabashi Daijingu, has a history that stretches back to the visit of legendary Prince Yamato Takeru who is said to have established the shrine nearly 20 centuries ago. The current shrine building, dedicated to the sun goddess Amaterasu, dates from the 1880s. The shrine precincts are the site of a rare surviving 19th-century lighthouse and the Funabashi morning market held a few times a year. 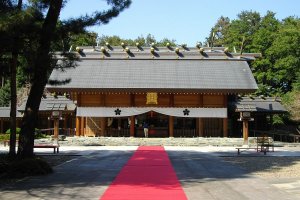 Lynda Hogan 3 weeks ago
Funabashi Daijingu sounds particularly interesting. To think I have visited the city several times and missed this gem! I'm just going to have to go back for another visit to take it in.
Reply Show all 1 replies

Elizabeth S Author 3 weeks ago
Funabashi City, the more you take your time with it, reveals some charms, right?

The shrine is dedicated to a sun deity (maybe even predating Amaterasu) and has a lighthouse. Lots of brightness going on.
Reply

Bonson Lam 3 weeks ago
What a beautiful memory of the astronaut "burrowing" the amulet to space and returning it to the home shrine. It reminded me of my homecoming journey in Kyoto. https://en.japantravel.com/kyoto/shimogamo-shrine/2435
Reply Show all 1 replies

Elizabeth S Author 3 weeks ago
What a lovely story!

I must admit, I don’t always take my omamori back to the shrines. Some I hold onto because I want to cherish the memory of my visit.

This year, many of my omamori will go back to the shrines and I’ll get new ones to support the shrines and pray for everyone’s health and safety.
Reply
4 comments in total
Back to Contents