Best known for one of the best airports in the world, Ota City Ward also happens to be Tokyo's largest ward. Accordingly, its temples and shrines run the gamut from local importance to national prominence, including housing the final resting place of one of Japan's most important religious figures. Here is an introduction to some of the temples and shrines of Ota and how to reach them.

Dedicated to the ubiquitous inari fox deity, Anamori Inari Shrine started life as part of Haneda temple town. Close to the airport, the shrine is filled with inari statues as well as a tunnel of bright vermilion torii gates. Each August, the shrine hosts a lantern festival with priests and attendants lighting handmade lanterns to pray for good fortune.

A 4-minute walk from Anamori-Inari Station on the Keikyu Airport Line.

Said to be the resting place of Nichiren Shonin, founder of Nichiren Buddhism, Ikegami Honmonji Temple is home to the Kanto region’s oldest 5-storey pagoda. Featured, too, is a hexagonal mausoleum made of Japanese cypress, while in October, the temple hosts a week-long festival commemorating the passing of Nichiren known as Oeshiki.

A 10-minute walk from Ikegami Station on the Tokyu Ikegami Line.

Despite having been rebuilt after the second World War, the detailed wood carvings on the main building and traditional ablution well give Kanjoji Temple the sense that it is as old as its actual 400 year history would suggest. A small pebble garden completes the landscaping design of this slightly hidden away Buddhist temple.

An 8-minute walk from Rokugodote Station on the Keikyu Main Line.

The centrepiece of Nitta Shrine is its venerable zelkova tree. Thought to be over 700 years old, the tree's maturity mirrors that of the shrine, said to have a history that dates back to the mid-14th century. In contrast to this history, the modern construction of the shrine - including a stone tennis table - gives it a decidedly fresh feeling.

A 3-minute walk from Musashi-Nitta Station on the Tokyu Tamagawa Line. 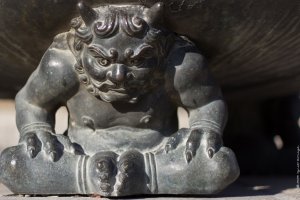