A taste of some of the local foods of Fukui

Often overlooked for its cuisine, Fukui prefecture turns out to be a veritable culinary gem. The prefecture is home to some of the nation's best crab and buckwheat ingredients, with Fukui cuisine replete with liberal amounts of snow crab and soba noodles. The sublime tastefulness of its sesame tofu and the powerful flavouring of its grilled mackerel show that the prefecture is also more than capable of covering all ends of the flavour spectrum. Here is a simple guide to some of the regional cuisine of Fukui.

Famous as part of Japan's shojin ryori Buddhist cuisine, Eihei-ji goma tofu is a tofu variation made from kneaded goma sesame and kuzu arrowroot starch. Served in Fukui's famous Eihei-ji with the Zen temple's famous slightly sweet and creamy miso sauce, this dish is not only a spiritual delight but a culinary one as well.

One of Japan's top 100 Rural Dishes, Echizen oroshi soba is Fukui prefecture's famous soba noodles in a bowl of dashi soup topped with a liberal amount of sliced daikon radish. Eaten in the region for over 400 years, the dish became nationally popular in the mid-twentieth century courtesy of the Emperor's fondness for the dish.

Fukui's famous snow crab gets pride of place in Echizen kanimeshi, one of the region's most famous dishes. A bed of rice steamed with a mix of, yes, the innards of a female snow crab, is then topped with a liberal amount of the snow crab's sweet flavoured flesh. Hugely popular as an ekiben railway lunch box, Echizen kanimeshi is a proper delight to eat.

A type of sushi known as bozushi, the saba bozushi of Fukui is topped with the prefecture's own mackerel that has been grilled and fermented vegetables. The shape of the sushi is as if it were a rod, hence the name bozushi which means staff-sushi. Fukui's version is a more recent creation and is now so popular, it has become a staple dish of the region. 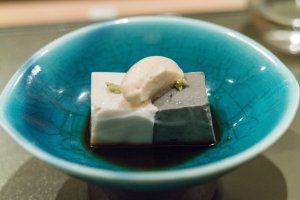 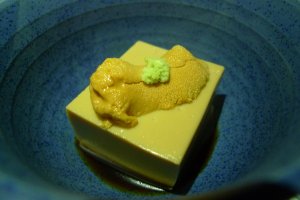 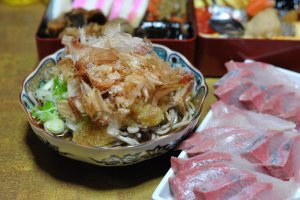 Sander van Werkhoven 3 weeks ago
Only had kanimeshi, was pretty great! Another local specialty I even stood 45 minutes in line for was the Fukui variation of sauce katsudon. It was worth the wait...

From this selection, the saba bozushi is the one I'm interested in the most, though that goma tofu and soba both sound pretty delicious too.

Just curious, have you tried all of these dishes yourself?
Reply Show all 1 replies

Sleiman Azizi Author 3 weeks ago
These ones, yes I have. I'm a fan of mackerel so I've a lot of time for hikari mono flavour while kanimeshi is divine. Proper crab meat please, not the processed looking stuff.
Reply

Kim B 3 weeks ago
I like the presentation of the Saba bozushi!
Reply Show all 1 replies

Sleiman Azizi Author 3 weeks ago
That one looks quite good, right?
Reply

Elizabeth S 3 weeks ago
Gomadofu is one of my favorite treats since me and ice cream don’t get along. With miso sounds a nutty, sweet, salty delight.
Reply Show all 1 replies

Sleiman Azizi Author 3 weeks ago
Sesame and tofu are a dream combination.
Reply
8 comments in total
Back to Contents