A taste of some of Gunma's local foods

Deep down in the belly lies Gunma Prefecture and its hearty cuisine. Headlined by an affection for wheat, udon noodles are all the rage here with some of the nation's most famous varieties a source of regional pride. Along with noodles are uniquely cultivated seafood, rural hotpots and festival-bound snacks, making the area a satisfying haven for soul cuisine. Here is a simple guide to some of the regional cuisine of Gunma.

Gunma loves its wheat and as one of the nation's top wheat producers, udon noodles are a natural hit here. The local treat okkirikomi, another hotpot of earthy vegetables and rural nous, uses thick strips of raw udon noodles. When simmered in the hearty broth, this winter dish is full of juicy texture and farming flavour.

If everywhere has their own special seafood, then for Gunma, that seafood is rainbow trout. The region's version is known as ginhikari and is specially selected and raised, taking longer to reach maturity than the more common rainbow trout. Sometimes grilled, the firm, delicate and vibrant colour makes it a treat when served a sashimi.

Considered by many to be one of the top three udon noodles in the country, Gunma's mizusawa udon competes with the prefecture's other udon varietes like the thin tatebayashi udon or the wide strips of himokawa udon used in okkirikomi. Only pure water is used in making mizusawa udon and its smooth and almost translucent texture making it an enviable treat.

Basted with a miso sauce that is both sweet and spicy, Gunma's soul food is yakimanju. Manju steam cakes are skewered with bamboo and then roasted over a charcoal flame. The aromatic appeal, fluffy texture and appetite teaser are so popular that a special festival is held each January that serves huge half metre-sized yakimanju. 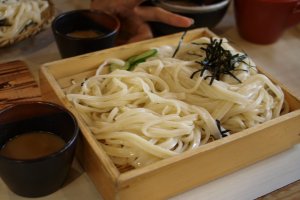 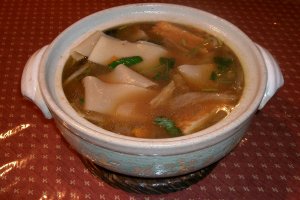 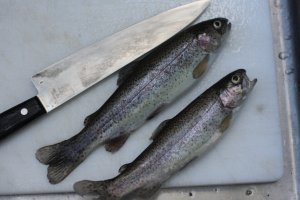 Sherilyn Siy 3 weeks ago
I love udon that has a chewy texture. A serving of it is extremely satisfying.
Reply

Elizabeth S 3 weeks ago
The yakimanju sound like a great treat! I've been to Gunma a few times, but didn't know what to look for in local cuisine. Next time I'll seek it out.
Reply Show all 1 replies

Sander van Werkhoven 4 weeks ago
When I visited Gunma, I had quite a list of dishes I wanted to try. Unfortunately many seem to be rather local, and while I found a restaurant in Takasaki that specialized in traditional Gunma cuisine, it turned out to be closed. So I just got the "Toge No Kamameshi" ekiben (clay pot rice), and the local specialty of Takasaki: pasta! I'm still very disappointed I didn't get to try the yakimanju :-(
Reply Show all 3 replies

Sleiman Azizi Author 4 weeks ago
Sander, I'm dying to read more about your experiences. Do consider writing an article or two... or more!
Reply

Sander van Werkhoven 3 weeks ago
I have actually been writing one about a matsuri, but found out the hard way the laptop where my pictures were on wasn't immune to gravity. Nothing should be lost, but there's a bit of a delay...
Reply

Kim B 4 weeks ago
Honestly, "headlined by an affection for wheat" is probably a quote that will also feature on my gravestone!
Reply Show all 1 replies

Sleiman Azizi Author 4 weeks ago
It's terrible, right!
Reply
13 comments in total
Back to Contents