A taste of some of the local foods of Niigata

Niigata prefecture may be famous for its koshihikari rice but the region also happens to be home to a swathe of local foods that are real treats of their own. Character-filled buckwheat noodles that are easy to eat, uniquely aromatic rice cakes, wild cooked sweetfish and a thrifty soup that is both hearty and wholesome are just some of the great dishes available. Here is a simple guide to some of the regional cuisine of Niigata.

Made with funori seaweed, the green-tinged hegi soba noodles of Niigata are smooth, slippery and go down a treat. Aside from their ultra-smoothness, hegi soba is also particular about its method of plating - the dish comes served in mouthful coils of noodles atop a special tray known as a hegi.

Niigata's signature sweet food, sasadango is mochi sticky rice flavoured with yomogi mugwort, filled with sweet red bean paste and then wrapped in a bamboo leaf. Once a snack-on-the-go during the old centuries of samurai civil war, this dark green delight has now become popular as a souvenir gift.

Sado Island's ayu no ishiyaki is an almost wild, spur of the moment dish of fresh ayu sweetfish cooked on riverside stones and seasoned with the sweetfish's liver as well as Sado's famous miso. Best eaten between August and October when the ayu catch is at its freshest, ayu no ishiyaki recalls the island's history and heritage of exile.

A staple at festivals and New Year celebrations, noppe shiru is a classic broth traditionally made from leftover vegetables that are then boiled and simmered in sesame oil. Ingredients are as varied as the homes that prepare it but this hearty feed is generally soy-sauce based and thickened with yams or starch and a great belly-filler during winter. 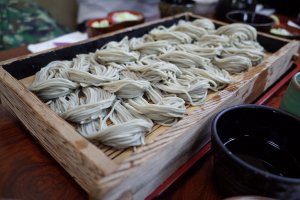 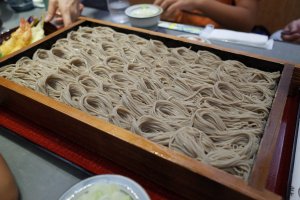 Sherilyn Siy 10 months ago
I can already smell the fragrance of sesame in the noppeishiru.
Reply Show all 1 replies

Elizabeth S 10 months ago
I suppose the hegi soba is tied with kitchen string to keep bundles together. It's a lovely way to serve soba. I prepare soba and somen this way sometimes.
Reply Show all 1 replies

Kim 10 months ago
Sasadango is so good! Added points for the eco-friendly packaging! ;)
Reply Show all 1 replies

Sleiman Azizi Author 10 months ago
So good indeed. It's got a real fresh taste to it. Thumbs up for sure.
Reply

Sander van Werkhoven 10 months ago
It's been 7 years ago, but as far as I can remember the only local specialty from Niigata I have tried was.....sake! Quite a bit of it. Maybe that explains why I can't really remember that much....
Reply Show all 1 replies

Sleiman Azizi Author 10 months ago
Hope to read about it as well!
Reply
10 comments in total
Back to Contents