A taste of some of the local foods of Tottori

Flavoured with a liberal dose of regional pride, the local cuisine of Tottori prefecture is rich in custom, flavour and provincial quality. A unique ramen noodle culture and top-quality crab dishes combine with simple hotpot dishes and old-style farming food to create a pleasurable blend of the traditional and the tasty. Here is a simple guide to some of the regional cuisine of Tottori.

Unlike other regions that savour their pork or chicken broth, Tottori is known for its use of beef bone for its ramen soup. Gyukotsu ramen is richly flavoured, hearty and such a standard flavour in the prefecture that ramen chefs in Tottori are said to simply not care about other styles of ramen. When something is so tasty, it's probably no wonder why.

Combined with soy sauce, mirin and sake, kanimeshi features Tottori's rich stocks of oyagani female snow crab cut into chunks and then mixed in with a bowl of steamed rice. Simple enough yet this regional favourite has attained an almost mythical status in its taste, with a flavour that is not only rich and gentle but also incredibly satisfying.

Tottori's famous leeks are the main ingredient in shireonegi nabe. A traditional earthenware hotpot dish, shironegi nabe makes use of kombu and bonito dashi stock which is then flavoured further with soy sauce and mirin. Shabu-shabu style, the leeks are dipped into the broth and then eaten. Works brilliantly with yellowtail sashimi.

Rice and vegetables cooked in fish broth and then wrapped in a sheet of deep fried tofu, itadaki is Tottori's traditional packed lunch dish. Especially popular in the western region of the prefecture, this old fashioned fisherman and farmer's lunch has the more common inarizushi look about it but, prepared differently, has a completely different flavour. 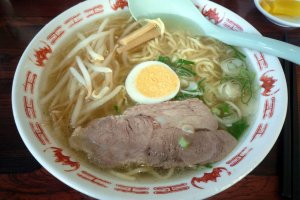 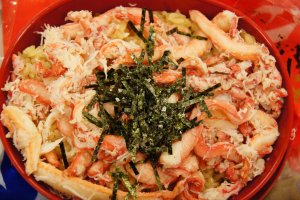 Elizabeth S a month ago
The itadaki- does that name come from itadaku, receive? That’s cool. They look hearty.
Reply Show all 3 replies

Sleiman Azizi Author a month ago
It may very well but I'm not sure. Either way, yes, quite hearty and delicious. I remember having one in Tokyo and having it explained to me that it "wasn't inarizushi."
Reply

Sherilyn Siy a month ago
Itadaki seems to have more tasty tidbits compared to inarizushi.
Reply

Sleiman Azizi Author a month ago
Yes, I recall it being more 'satisfying.'
Reply

Sander van Werkhoven a month ago
I've had kanimeshi before, though not in Tottori yet, so this begs for a comparison :-)

The other dishes all sound simple yet very tasty. Would Love to try them all!
Reply Show all 1 replies

Sleiman Azizi Author a month ago
I know people whose eyes light up when you say kanimeshi.
Reply

Elena Lisina a month ago
Kani is still what I must try! I wish I could try more, but always save money...
Reply Show all 2 replies

Sleiman Azizi Author a month ago
I completely understand. The cheap stuff simply doesn't compare. It really doesn't. When you have real crab, you immediately understand the appeal.
Reply

Elena Lisina a month ago
I hope to try it next time! But very often I don't have anything but onigiri in a whole day. :D
Reply

Kim B a month ago
Never knew that about the beef broth - I prefer beef over pork, so now I feel like I've got to try that ramen!
Reply Show all 2 replies

Sleiman Azizi Author a month ago
They'll love you in Tottori then!
Reply

Sherilyn Siy a month ago
Beef has a stronger, deeper taste than pork and I reckon the broth is similar to full-flavored pho -- I can imagine how satisfying this ramen would be.
Reply
12 comments in total
Back to Contents