A taste of some of the local foods of Yamagata

Soups and hotpots seem to hold an important place in the local cuisine of Yamagata prefecture. Dishes include vegetable and salmon-based soups, as well as cod fish ones both making use of the region's famous sake rice wine production byproducts. Another soup is a chilled one while wild mountain vegetables and game meat are used in the the prefecture's signature hotpot dish. Here is a simple guide to some of the regional cuisine of Yamagata.

Kasu jiru is a soup dish that sees radishes and dried soybeans simmered in sake lees, a by-product of Yamagata's famous rice wine production. The addition of salted salmon for an even richer taste helps this warming dish go down like a treat during Yamagata's strong winters, heating up the body from the inside out.

The prefecture's signature hotpot dish, sansai nabe makes good use of Yamagata's large variety of wild mountain vegetables. Thrown into a big pot full of broth seasoned with soy sauce, the vegetables, along with the addition of chicken and at times, rabbit or even bear, gives this dish an untamed thumbs up for flavour and character.

Dongara jiru is a hotpot bowl of delicious cod that makes use of the entire fish - head, innards and bones. Prepared by cutting into large chunks, ingredients like tofu, scallions, miso and seaweed for seasoning are also added. Often cooked at home, the inclusion of Yamagata's famous sake lees and radish makes dongara jiru a winter favourite.

Another of Yamagata's famous soup dishes, hiya jiru is a cold soup that has been eaten in the region for some four hundred years. With its broth based on fish or shellfish and filled with mustard spinach, cabbage and cucumber, the original dish featured the use of yukina leaves, giving hiya jiru a memorable flavour and texture. 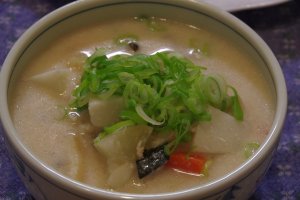 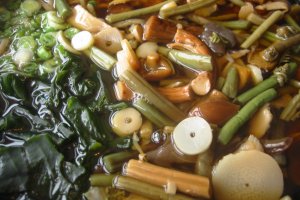 Sander van Werkhoven 3 weeks ago
No Yonezawa beef on this list? Let's just hope the people of Yamagata won't find out about this....

I've only been 1 day in Yamagata and knew none of these dishes, but I'd love to try them all.
Reply Show all 1 replies

Sleiman Azizi Author 3 weeks ago
I've got my running shoes on!
Reply

Sherilyn Siy 3 weeks ago
Dongara jiru is straight out of Fear Factor.
Reply Show all 1 replies

Sleiman Azizi Author 3 weeks ago
I was waiting for someone to say something like that.
Reply

Elizabeth S 4 weeks ago
I’ve had sansai soba before, but sansai nabe looks packed with veggies. I’d try that.
Reply Show all 1 replies

Kim B 4 weeks ago
I really like that so many regional dishes work so well with the climate. Food by design!
Reply Show all 1 replies

Sleiman Azizi Author 4 weeks ago
Well, it makes sense doesn't it? Why fight nature?!
Reply
8 comments in total
Back to Contents