Home to the most populated ward in central Tokyo, Setagaya City Ward also offers its residents some of the capital's most relaxed urban ambiences. The many temples and shrines of the area, too, are a pleasure and include lucky cats and moss covered exoticism. Here is an introduction to some of the many temples and shrines of Setagaya and how to reach them.

While it may be famous for its hundreds of maneko-neko lucky cat statues, Gotokuji Temple actually started out life as the family temple for a feudal lord. Now designated as a historical landmark of the city, this temple surrounded by suburbia is home to a well preserved entrance gate as well as a traditional bell tower.

A 3-minute walk from Miyanosaka Station on the Tokyu Setagaya Line.

Set within a cluster of many temples, the beautifully maintained Myojuji Temple features some lush landscaping, bamboo groves and an iron-cast bell and tower. The gingko tree outside the entrance gate is another highlight while the temple is culturally recognised and home to the final resting place of the much loved actress, Reiko Ohara.

An 18-minute walk from Kugayama Station on the Keio Inokashira Line.

With its traditional red painted wood structures and stones covered in green moss, Rokusho Shrine strikes a stunningly picturesque tone. Established in the late-16th century, the shrine is set within a grove of trees considered sacred, and its subdued ambience lends itself well to some some serious soul searching.

A 9-minute walk from Sengawa Station on the Keio Line.

Flanked by two cherry blossom trees, a visit to Sakura Jingu Shrine during the spring blooming season justifies the shrine's name. Established in the mid-19th century and then moved to the city over one hundred years ago, this neighbourhood shrine hosts a tradition of writing wishes on a pink ribbon and tying it to the cherry blossom tree.

A 2-minute walk from Sakura-shimmachi Station on the Tokyu Den-en-toshi Line. 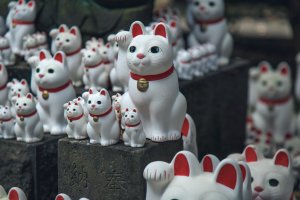 Kim 2 weeks ago
Gotokuji is also a favorite for me!
Reply Show all 1 replies

Sleiman Azizi Author 2 weeks ago
It's a cutey, that's for sure.
Reply

Elizabeth S 3 weeks ago
Rokusho Shrine looks like a country shrine. What a treasure within the city with its treed landscape.
Reply Show all 1 replies

Sleiman Azizi Author 2 weeks ago
And to think that Setagaya has the largest population out of all of Tokyo's central wards.
Reply

Sleiman Azizi Author 2 weeks ago
You wrote about it recently, right?
Reply

Elena Lisina 2 weeks ago
Yes, I visited it in summer 2019. And I liked the district around - like a small town.
Reply
7 comments in total
Back to Contents