An explosion of modern appeal and heritage

The recognised hub of youth culture, Shibuya City Ward is a movement of contemporary heritage. A never-ending appetite for change, the city bursts at the seams with development and spectacle. Here is an introduction to just a tiny fraction of the many landmarks and historical spots of Shibuya and how to reach them.

Deep within Meiji Jingu can be found Kiyomasa's Well, a well famous as one of Tokyo's few 'power spots'. Believed to have been struck by Kato Kiyomasa, a powerful feudal lord of the 16th & 17th centuries, the well's crisp clean water draws in people from everywhere who come to absorb the well's positive energies.

A 10-minute walk from Harajuku Station on the JR Yamanote Line.

Easily overlooked is another one of the city's never ending meeting points, the Moyai Statue. Shaped like a giant Easter Island rock sculpture, this iconic-dreaming landmark sits in a bed of flowers and was a donation from the volcanic island of Niijima in 1980. It's been greeting Shibuya Station visitors and commuters ever since.

irect access from the Sourh Exit of Shibuya Station on the JR Yamanote Line.

One of Tokyo's most famous experiences, the Shibuya Crossing is believed to be the busiest intersection in the world. With over 2,500 people crossing at any one time, around 250,000 people cross this intersection each day. A marvel of motion, the crossing is also home to the world famous Hachiko Statue, and Japan's youth culture.

Direct access from the Hachiko Exit of Shibuya Station on the JR Yamanote Line.

An observation deck that is part of the Shibuya Scramble Square development, Shibuya Sky sits over 200m above the ground with some of the most extraordinary views of Tokyo you are ever likely to see. The JPY2000 admission fee gives you access to a deck spanning three floors, and features a dazzling digital arts display, cafe and bar.

A 1-minute walk from Shibuya Station on the JR Yamanote Line. 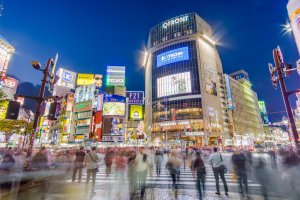 Elena Lisina a month ago
Very lively district! I always visit it just shortly and wonder - why there are so many people? :)
Reply Show all 2 replies

Sleiman Azizi Author a month ago
There is just so much here. This article, even the other ones about Shibuya that I wrote, don't even cover half of it.
Reply

Elena Lisina a month ago
Yes, I know. :)
Reply
3 comments in total
Back to Contents