With its easy access to central Tokyo and plenty of green space, Suginami City Ward is a residential space with a sense of vibrancy to its character. Here then is an introduction to some of the landmarks and historical spots of Suginami and how to reach them.

A bastion of local charm, Koenji Junjo Shotengai is home to over 200 stores. Featuring plenty of eateries and discount stores, the street also surprises by being the home of of a thriving underground music scene. As one of Tokyo's more well known traditional shopping streets, it also hosts the Koenji Awa Odori Festival every August.

Direct access from the North Exit of Koenji Station on the JR Chuo Line.

The legendary Heian period warrior Minamoto no Yoshiie is said to have hung his horse's saddle on this pine tree while on his way to lay down the law in northern Japan. Some 900 years later and the Kurakake no Matsu, which means 'saddle-hanging pine tree', is now considered a sacred tree and treated accordingly.

A 15-minute walk from from Nish-eifuku Station on the Keio Inokashira Line.

A 43km-long water canal, the Tamagawa Aqueduct connects central Tokyo with its western towns. Constructed in the mid 17th century, the canal was completed in an incredible 18 months. The section that threads its way through the city is a lovely walkway stretching for about 1.5km and full of greenery.

A 9-minute walk from Fujimigaoka Station on the Keio Inokashira Line.

An upmarket public bathhouse, Utsukushi-no-Yu is one of the many sento bathhouses dotted throughout the city. Designed to be relaxation heaven, a JPY950 weekday admission entitles you to some wonderfully satisfying rotenburo outdoor bathes as well indoor ones. The restaurant with it seasonal menu is also a treat.

A 2-minute walk from Takaido Station on the Keio Inokashira Line. 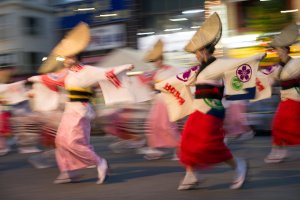 Kim a week ago
I'm happy to see trees held in such high regard!
Reply Show all 1 replies

Sleiman Azizi Author a week ago
Some of them anyway.
Reply
2 comments in total
Back to Contents