A taste of some Nagasaki's summer celebrations

Nagasaki offers a host of summer celebrations and those visiting the prefecture will find plenty to do, even in the hottest days of the season. Have a look below for a taste of some of the upcoming festivals in Nagasaki.

An event that occurs during the week of Obon, spirits of loved ones who have passed away in that particular year are represented on beautifully decorated boats. Family members carry them through the city streets to the harbor where the boats are burnt. The spirits are then sent to heaven as part of the ceremony. While the festival may reflect some sadness and mourning, there is also an element of celebration tied to the idea that their family members reaching heaven. Firecrackers and gongs accompany the festival to send the spirits away.

The small town of Emukaecho in Nagasaki Prefecture boasts one of the largest lantern festivals Japan has to offer. The main attraction of the festival is the tower of lanterns measuring 25m tall, which contains around 3,300 lanterns. Over 10,000 lanterns eventually light up the city once evening arrives. Children can also have fun splashing water at a jizo statue during the ceremony to pray for protection from illnesses.

This is one of the largest fireworks displays in Kyushu and takes place alongside the harbour in Nagasaki. Expect to see around 10,000 fireworks on the first night, and a further 5,000 on the second night in one of the most stunning fireworks spectacles in the region. Entertainment from music bands to singers to local dance troupes perform throughout the evening. Food stalls also offer a range of Japanese dishes to keep you full right into the late night. ​

Travel writer & photographer based in the Kansai region of Japan. Regional Partner for JapanTravel for the Osaka region. 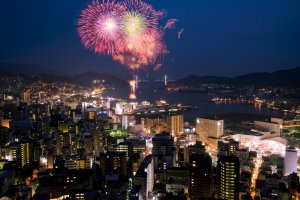 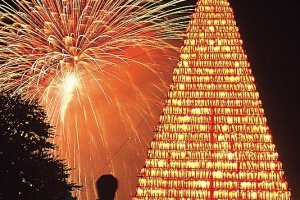 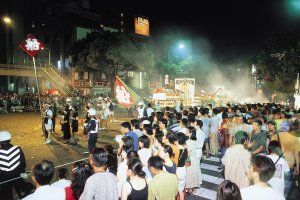