Riding some of the world's best taxis

Its massive, jumbled maze of public transportation is one of the many great things about Japan, but it can also prove to be quite a challenge to conquer for foreign tourists. While riding trains might be part of the Japanese experience, sometimes it's just easier to take a taxi.

And although many Japanese people often consider taxi to be the last resort of transportation options - usually climbing into one begrudgingly after midnight and all trains and buses have stopped running - Japanese taxis are often lauded as being one of the best in the world, despite their relative priceyness.

Although you can flag down a taxi on the road by simply raising your hand and hoping one will stop, the more efficient way is to line up at a “taxi stand,” usually located in front of train stations, along with bus stops. Taxis will be almost always be waiting in line to pick passengers up at these taxi stands, no matter what time of day; the downside to waiting for one at a stand is that the lines for taxis can get extremely long, especially late at night.

Fares are almost always by the meter in Japan. Most taxis have an initial 2 km fee, which differs by region; for Tokyo, the starting fare is 730 yen. Additional fares also depend on the region and/or the company - for example, every extra 280 meters after the initial 2 km is 90 yen in Tokyo, while for every 105 seconds the taxi is stationary there is also a 90 yen charge. Fares are usually 20% extra during midnight hours, usually from 10 pm to 5 am. The passenger is also responsible for any highway toll fees that were incurred during the ride. Taxi fares can be calculated using Numbeo, while Ainoriya is a useful smartphone app that can find rideshare partners, decreasing the amount you pay. Don’t forget that tips are not necessary in Japan!

More luxurious taxis are also available for hire (such as the MK Taxi Limousines) for much higher prices. In certain tourist areas such as Kyoto, private flat rate tourist taxi services like the Kohno Jumbo Taxi are offered with English speaking guides.

Japanese taxi drivers are generally regarded as friendly and will not try to cheat you, and almost all taxis on the streets are licensed. However, they do have the right to reject heavily intoxicated passengers. While most taxi drivers know basic English and most taxis are equipped with GPS systems, the best way to communicate your desired destination is to show them the address.

An electronic plate on the passenger side of the windshield indicates whether a taxi is vacant (空車), occupied (賃走), or midnight fares are being applied (割増). Almost all taxi doors are automatically opened and closed by the driver so watch out! And don’t forget to put your seatbelt on - Japanese law requires all passengers to wear one.

As aforementioned, certain “special” taxis operate in tourist areas, such as the Kohno Jumbo Taxi above and the unique Cyclopolitain Taxi in Yokohama.

One interesting thing you may notice as you walk on the streets in Japan is parked taxis with napping drivers inside them! With many taxi drivers on the job for 20 hours a day as people use Japanese taxis well after midnight, they must cram in quick power naps during their daytime breaks. A startling sight, but by no means are they slacking on the job - and better they sleep in their parked cars during the day than at the wheel at night! 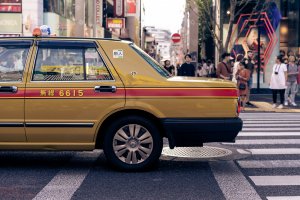 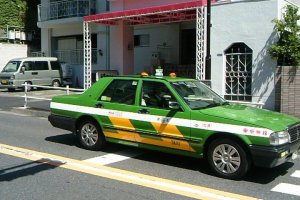 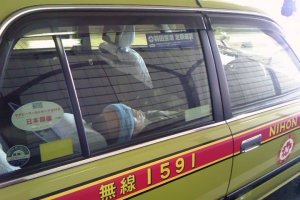 Sleiman Azizi 4 years ago
It was a surprise the first time it happened to me but unless your driver is a so inclined, the passenger is responsible for loading the boot/trunk with their luggage.
Reply Show all 0 replies
1 comment in total
Back to Contents