The Language of Sumo

You've loved watching your first sumo tournament and still have no idea what is going on. Right? To get you up to speed for your next tournament (or your first if you've been asleep), here is a guide to some basic sumo terminology.

Referees are called gyoji while wrestlers are known as rikishi and are organised according to ranks. The highest rank is yokozuna, followed by ozeki, sekiwake and komosubi. The rest of the wrestlers in a professional tournament are ranked at various levels of maegashira.

A winning record in a tournament is kachi-koshi while a losing one is make-koshi. Yokuzuna with a losing record are encouraged to retire whilst ozeki are placed on a kind of probation called kadoban where they receive a chance to maintain their rank the following tournament.

The yobidashi is the announcer you will see who melodiously calls out the name of each wrestler to the ring.

Marked with a tawara straw rope, a sumo ring is called a dohyo and a new one is made prior to each of the six annual tournaments, or basho. Sumo has very strong Shinto roots and a dohyo-matsuri ring purification ceremony is held before each basho. Wrestlers, too, purify the ring before each bout in a shubatsu salt-throwing ritual.

Wrestlers wear nothing except for a mawashi loin cloth. When they perform the dohyo-iri ring entering ceremony at the start of a tournament, they'll wear a heavily embroidered apron called a kesho-mawashi.

Bouts begin once both wrestlers hands touch the ground. To encourage this referees will say "Te wo tsuite." The tachiai start is vital in sumo. If it is a false start, the referee will exclaim "Mada, mada!" while "Nokotta, nokotta" is the referee letting the wrestler know that they are still in the match. If wrestlers need some 'encouragement', you'll hear the referee yell out "Hakkeyoi!"

In the event that the referee's decision needs to be queried, the four black hakama-wearing ringside judges will enter the ring to confer. This is called a mono-ii. If a rematch is required, this is called torinaoshi.

So there you have it, some basic terminology to help you understand a bit more about the seriously addictive world of sumo. 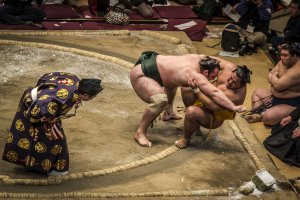 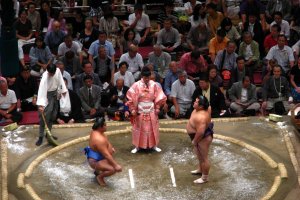 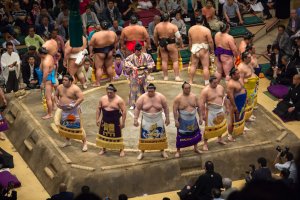 Elizabeth S 3 years ago
Thanks for this guide!

Sleiman Azizi Author 3 years ago
Like everything else, there is a lot more if you go deeper into it but I think this list suffices as an intro.
Reply

Kim 3 years ago
Very helpful! I knew some of the terms but definitely not all of them.
Reply Show all 4 replies

Sleiman Azizi Author 3 years ago
A simple guide but a little bit of info can really help to enjoy sumo more.
Reply

Kim 3 years ago
Absolutely - the more I understand, the more I can take it all in and enjoy it, so it's appreciated!
Reply

Kim 3 years ago
It's like knowing a whole new language of terms!!
Reply
7 comments in total
Back to Contents