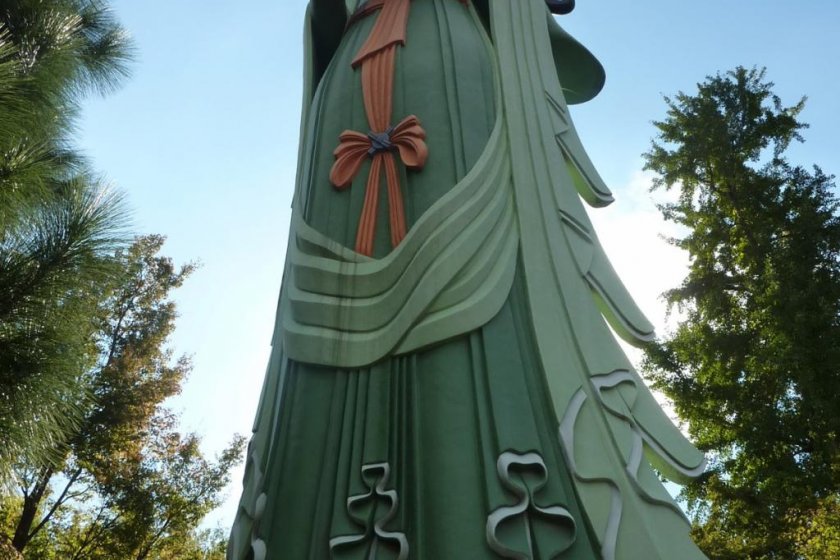 A visit while riding along the Shimanami Kaido

Giant 15 metre tall statue of Kannon, the Goddess of mercy, at the Kosanji Temple

Konsaji is a Buddist temple located in the small ocean town of Setoda on Ikuchi island which belongs to the city of Onomichi, Hiroshima Prefecture.

We were on bikes as, after catching a ferry to Setoda port (40mins from Onomichi) and having looking at the temple, we were planning to continue along the Shimanami Kaido Bikeway to Imabari on Shikoku.

The Kosanji Temple was built quite recently in 1936 by a businessman in honor and memory of his mother, and belongs to the Jodo-Shinshu Sect of Japanese Buddhism. The complex is quite elaborate and features a cave, a hill of marble and many buildings modeled after famous Japanese temple buildings.

After buying our tickets (1,200 yen) we were given a booklet with five blank spaces in it. It was for a 'Stamp Rally' and the lady showed us a map where the different stamps where located and said we'd receive a present if we managed to collect all five. A present!

The temple complex is built into a hill and terraced into four main sections which are connected with stairs. Thanks to some slopes on the eastern side the temple is also wheelchair accessible.

We started by looking at a few of the different buildings on the western side of the first level (which included a bell tower and a few gates) before proceeding up some stairs to an impressive five storied pagoda and two other big buildings.

We had so far collected our first two stamps and at this point found the entrance to the cave.

The cave started in the side of a hill and led down underneath the temple. It was quite elaborate at 350 m long and took about fifteen minutes to walk all the way though. The first section had some quite gruesome artwork and statues that depicted the Buddhist version of hell with demons squashing, cutting and otherwise mutilating people.

The path then twisted around a fair bit and had a number of spiral staircases as well as bridges leading over the water that flowed through the cave. At some points this water tickled down as a little waterfall and the sides of the path were lined with hundreds and hundreds of Buddha statues.

After about a quarter of an hour wandering through the dim cave, we finally emerged into the dazzling sunlight further up the hill on the third level. Near where we came out there was a giant 15 meter tall statue of Kannon, the goddess of mercy.

We had a look around the surrounding area which included an octagon hall, a tea house as well as a nice little Japanese garden.

Further away from the statue on the same level there were some more halls, a temple gate, as well as the main temple building.

From here we went up to the final level which is the location of “Miraishin no Oka” or "The Heights of Eternal Hope for the Future". This area does not have any religious purpose and was built from imported Italian marble purely for artistic reasons. We got our third stamp near an elevator that provided access to this top part of the temple.

The amount of marble on the hill was incredible!

Since it was such a nice sunny day the marble was very white and bright and looked really expensive.

We walked along a marble path that led to the pinnacle of the hill which provided excellent views of the surrounding town, mountains, islands and the sparkling Seto Sea!

This area was absolutely covered in marble and there were some stairs leading up to the apex where the "Tower of the Light" statue stood.

There were also a number of other abstract statues around as well as a café built out of marble.

Once we were sufficiently dazzled, we went back down all the stairs and had a look at a few buildings we'd missed on the eastern side of the first level and found the penultimate stamp.

To get the final stamp we had to exit the temple and visit a building across the road which turned out to be a museum housing Buddhist art.

There was no one else in there apart from a lady who offered us a choice of one of two post cards as a prize after we collected the last stamp.

Since we were there we felt obliged to have a look around. While it was quite a big building there was not a huge amount of art on display and we gave it a quick lap before exiting and returning back to our bikes.

Visit my blog to read about the rest of our journey on the Shimanami Kaido as well as our other adventures in Japan! 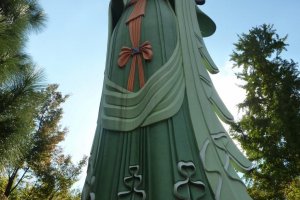 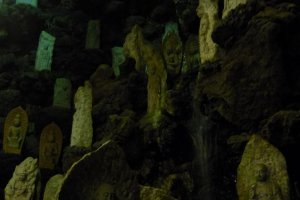 Victoria Vlisides 4 years ago
This is TOO gorgeous!
Reply Show all 0 replies
2 comments in total