Colorful tulips in a range of different varieties

Each year from around mid April through to mid May, Hiroshima's Sera Kogen Farm hosts a tulip festival which consists of a whopping 200,000 tulip bulbs covering a space of approximately 15,000 square meters. There is also an early spring garden that showcases some other seasonal blooms, such as hyacinth and rapeseed flowers.

Do note that like any flower festival, the dates can be subject to change depending on blooming conditions. It's advisable to check the official website before you plan on attending to confirm the flowers will be at their best. 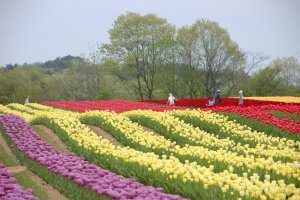