Running annually since 1992, the Otofuke Tokachigawa Swan Festival celebrates the migration of around 1,000 white swans that fly into the Tokachigawa Onsen area each year. The event incorporates a laser show and a large-scale illumination of over 600 light bulbs and LEDs, and typically draws in around 60,000 annual visitors.

The event takes place from the mid January to late February timeframe, and the official dates are posted on the festival's website closer to when it commences. Do note that in the case of bad weather the event can be canceled, so keep your eye on the forecast!

Admission to the festival is free of charge.

The Otofuke Tokachigawa Swan Festival takes place at Tokachigaoka Park (十勝が丘公園). For those who plan to drive to the venue, free parking is available on-site.

For those who are visiting via public transport, head to JR Obihiro Station which is served by the Nemuro Main Line. From there, the park is around a 20 minute taxi ride away. 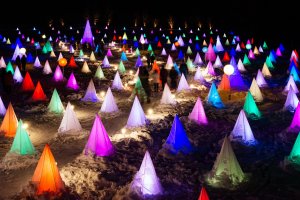 Elena Lisina 9 months ago
Looks spectacular! I've read before that swans come to Japan from Russia for winter, and they're welcomed in Japan. :)
Reply Show all 0 replies
1 comment in total