Held annually from mid-February through until late March, the Mount Tsukuba Plum Festival showcases the beauty of around 1000 plum trees in varying shades of red and white. At the top of the plum-tree dotted hillside there's an observation stand where visitors can enjoy picturesque views of the blossoms and the greater Kanto region. On exceptionally clear days, that view can even include skyscrapers on the Tokyo skyline and Mount Fuji!

Admission to the festival is free of charge.

The Mount Tsukuba Plum Garden is located around a thirty minute drive (20 kilometers) from the Tsuchiura Kita Interchange on the Joban Expressway. Free parking is available at the venue.

For those using public transport, head to Tsuchiura Station, served by the Joban Line. From there, take the local bus bound until you reach Tsukubasanguchi (travel time is around 50 minutes). From the bus stop, the plum garden is around a 15 minute walk away. 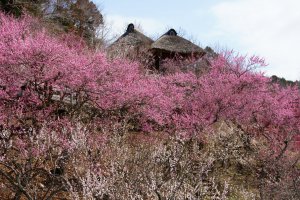 Elizabeth S 3 months ago
Likely the air will be clear during that plum blossoming. The last time I was on the peaks at Mount Tsukuba, I could see Tokyo and Mount Fuji looking west and the Pacific Ocean looking east. You really feel on top of the world there.
Reply Show all 1 replies