A fun place in Kanazawa for food, drinks and music

Looking for lunch one day after a morning seeing the sights of Kanazawa, I was in the mood for something tasty, filling and inexpensive, as usual. I saw a sign that said curry, but then next to it saw another sign that said for JPY1000 I could get a big lunch of omu rice and side dishes. Sold to Supremo!

It's a very fun, chill place, that looks like it's been furnished and decorated from yard sales, and I mean that in a good way. There's a mix of comfortable low couches and wooden tables and chairs, a whole lot of eclectic decorations and hangings, and vinyl records all around the walls and DJ booth. Yes, the DJ booth - they seem to do music as well as food and drink, with some DJ nights and concerts, and I had a soundtrack of lively post-punk as my dining BGM.

My lunch was as good as I'd hoped. I started with a green salad and a plate of mustardy potato salad with raw vegetables, a pleasant and interesting mix of tastes and textures. The main dish was omu rice, sticky rice flavoured with tomato and topped with an omelette, served here with a creamy sauce made with mentaiko, slightly tangy cod roe. This was also delicious, the rice firm and the omelette and sauce both enjoyably smooth.

The menu is in both Japanese and English, with main dishes consisting mostly of various kinds of omu rice, for between JPY1000 and JPY1200; other varieties include kimchi and soup curry. Side dishes such as fried onion, cheese and carpaccio are JPY500, and for the same price they also do plenty of cakes, among them caramel banana, chocolate and coconut.

There are a range of coffees, teas and juices, costing from JPY500 to JPY800, while beers and cocktails are mostly around JPY600. That said, apparently there's a Happy Hour that lasts from opening at 11:00am to 10:00pm - Happy Eleven Hours! - with some beers and cocktails going for JPY500. 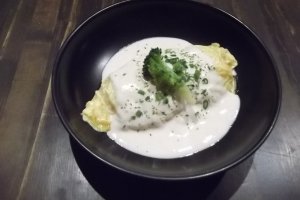 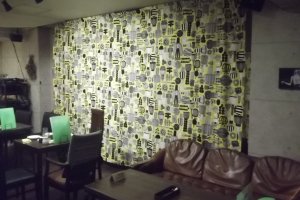 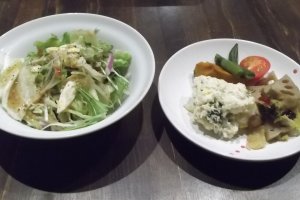 Peter Sidell Author 5 months ago
It was just as sumptuously creamy as it looked!
Reply

Kim 5 months ago
I like the decor, too!
Reply Show all 0 replies