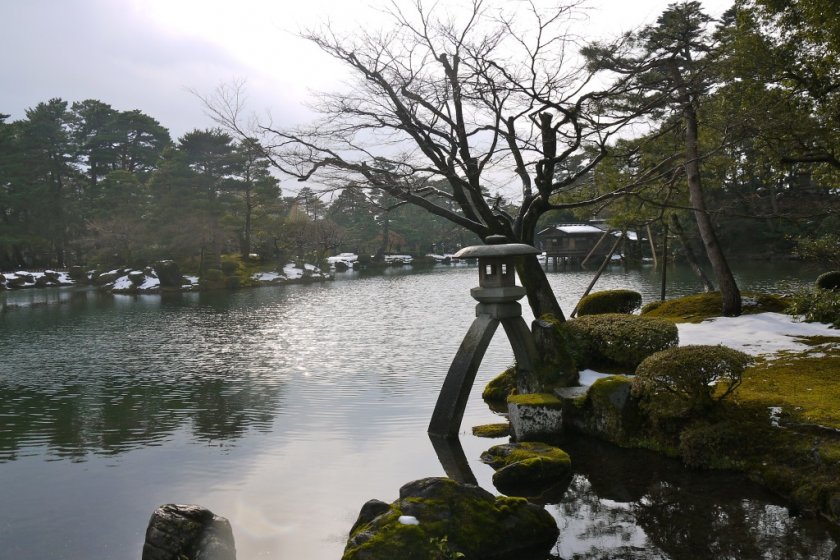 Kenrokuen: A Park for Winter's End

Kanazawa’s Kenrokuen is a majestic treat in the snow

Walking around Kenrokuen Garden in the often over-looked castle town of Kanazawa, Ishikawa on a snowy afternoon, it’s easy to forget that the sleet falling ever more heavily is quickly dampening every part of my body. Without an umbrella, I am destined to a day of eternal dew, but lucky for me, Kenrokuen’s tranquility really does have a magical effect.

Considered one of the “Three Great Gardens of Japan” (the others being Korakuen in Okayama and Kairakuen in Mito), Kenrokuen is a treasure to visit during every season. But as powdery, ivory snow covers almost every inch of the meticulous landscape and yukitsuri (bamboo poles and ropes designed to protect trees from heavy snow) are erected, it becomes clear that winter is when this garden truly shines.

Before the last winter snow falls (nagori yuki), Kenrokuen is a garden not to be missed.

Kenrokuen's name means “garden that combines six characteristics," referring to an ancient Chinese text on gardens that states there are six qualities of a “perfect” garden: spaciousness & seclusion, artifice & antiquity, water-courses & panoramas. Most gardens only include some of these qualities, but Kenrokuen was designed to encompass all of these characteristics. Most visitors are probably unaware of these six qualities when strolling through the garden, so it’s easy to take for granted how much Kenrokuen contains in its sprawling and gleaming 25-plus acres.

It is a testament to the garden’s design that you can feel both alone and at a bustling tourist attraction during your stay in Kenrokuen. As I sauntered through the garden on a Monday afternoon, I ran into several large groups of tourists who were receiving a guided tour of the area and eagerly snapping pictures wherever they could, yet I also managed to find spaces of the garden that felt just my own. I walked up a small set of snow-capped stairs to encounter a quiet resting area overlooking the garden. Alone, I looked at the garden below me and admired the sight of two young women walking with umbrellas across a bridge. They stopped for a moment in the middle of the bridge to look across the pond and at the yukitsuri towering in front of them.

In February, these same yukitsuri become even more stunning as they are illuminated and mini-concerts are held in the Uchihashi-tei teahouse by Kasumiga-ike (Misty Pond).

Although visitors will probably discover their own favorite part of the garden, of particular note in Kenrokuen is the Kotoji stone lantern, located on the northside of Kasumiga-ike Pond. This stone lantern is a symbol of Kanazawa, and its unique design resembles the tuning forks of the Japanese musical instrument “koto” (a Japanese harp tuner). There is also the Meiji Monument, a five-meter high bronze statue of the legendary hero Yamatotakeru-no-Mikoto, the tranquil Midori waterfall and teahouses throughout the garden.

For those worried about missing an exceptional spot, there is a suggested walking route taking about 90 minutes and hitting all of the major points in Kenrokuen.

When I looked down at the city below, thick clouds obscured some of my view of the streets, but I could see the rooftops of snow-covered houses and buildings. I imagined cars below me zooming quickly on the streets below as pedestrians stood shoulder-to-shoulder, clutching their umbrellas and waiting for traffic to clear. Behind me, pine trees dusted in snow and the sound of gently flowing waterfalls reminded me that it’s not hard to find six types of tranquility in a city on a cold winter’s day – you just have to look in the right places.

Until 2014, Kanazawa lacks a direct shinkansen route, so take the JR Joetsu Shinkansen from Tokyo to Echigo-Yuzawa Station and transfer to the JR Special Express train to Kanazawa Station (the journey takes about four hours and costs roughly 13,000 yen).

Find out more about Kenrokuen Garden. 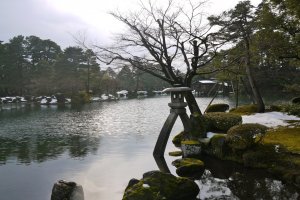 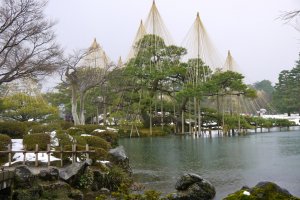 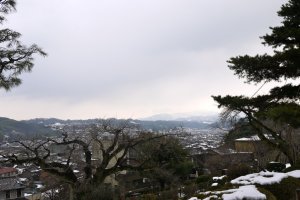 Kim 4 years ago
I've only been here in the summer but I feel like it warrants a return visit in the winter months too!
Reply Show all 0 replies

Rachel Ooi 5 years ago
This place does look more magical in winter, but I enjoyed it well too even in summer when I was there.
Reply Show all 0 replies

Elena Lisina 5 years ago
I'm the fan of Japanese lanscape gardens. I've seen many and each is different and unique!
Reply Show all 0 replies

Anonymous 9 years ago
I visited Kenroku-en this year as part of an H.I.S. bus tour and found it beautiful. Unfortunately they only gave us 60 minutes to view the entire park! Probably need around two hours to fully enjoy.
Reply Show all 0 replies

Amber Mezbourian 9 years ago
I love Kenroku-en! I visited last summer and thought it was breathtakingly beautiful, so it's interesting to see how it looks in a different, colder season.
Reply Show all 0 replies
5 comments in total