Just a few hundred meters from the department stores and busy thoroughfares of downtown Kanazawa, the Nagamachi Samurai District calls to mind the golden age of Japan's proud warriors. When the Maeda lords moved into Kanazawa Castle at the start of the Edo period, their many retainers accompanied them and the loyal clans settled into the Nagamachi area southeast of the castle.

Today, much of the feel of the district remains. Mud-packed walls and tiled roofs call to mind the heyday of the Edo period and a walk here feels very much like stepping back a few centuries. You can freely explore the narrow alleyways (many of which are closed to vehicles) or pop your head into the following tourist sites:

The Onosho Canal, the oldest of Kanazawa's canals, runs through the middle of the district. Along with adding a scenic element to the neighborhood, the canal was used in feudal times as a transportation artery for barges as well as an emergency water source in case of fire. Many of the samurai residences are located at the edge of the canal, with a small bridge built over the water to reach the estate's main gate. The wealthy residents also used the water to tend their gardens.

In the wintertime, the city authorities cover all of the district's mud walls with rolls of straw to protect them from the harsh Kanazawa weather. Akin to the preparation of trees for the winter that is done in nearby Kenroku-en, it makes for an intriguing sight in the colder months. 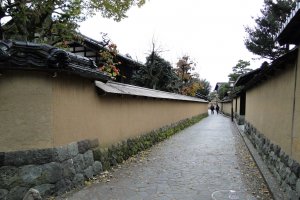 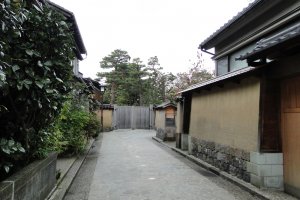 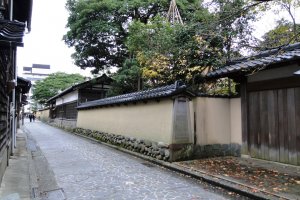 Cathy Cawood 6 years ago
I've been here! It's a wonderful area. Your photos make me want to go back again! My favorite thing was the apothecary's house.
Reply Show all 1 replies

Mandy Bartok Author 6 years ago
And it's so untouristed! I was shocked by how few people were in the neighborhood while I was there. I'd love to go back to Kanazawa. Such a great city.
Reply

Justin Velgus 6 years ago
This is really cool!! I didn't know such a place existed outside the movies.
Reply Show all 1 replies

Mandy Bartok Author 6 years ago
Justin, I was surprised by how few people seem to visit it or even know about it. It's a beautiful neighborhood and very centrally-located.
Reply
4 comments in total