A unique festival celebrated for over 800 years

The Tsurugi Horai Festival is held on the first weekend of October every year, as a mid-autumn festival. It has been running for over 800 years.

The festival is based around the Kinkengu Shrine, where the God of the Shrine is carried around town in a 'mikoshi' - a kind of portable shrine used for festivals. A group of 40-year-old men from Tsurugi carries the mikoshi around town and a blessing is made at important households, which in turn provide an offering.

But the most exciting part of the festival is the several floats, made new each year by the various towns. These massive works of art are carried around behind the mikoshi on the shoulders of the townspeople. Several lion-dances called shishimai are also performed. Unlike most areas in Japan where the lion dances, here the lion is killed in a lively performance by 'bakumen' - a type of monster - who wields various weapons. The performance is accompanied by a flute and shamisen performance.

The festival begins at 8 a.m., and runs late into the night from Friday to Sunday, with many food stalls lining the streets.

The festival runs throughout central Tsurugi. You can access Tsurugi by train. Once you arrive, just listen for the sounds of chanting and you'll soon find the parade. 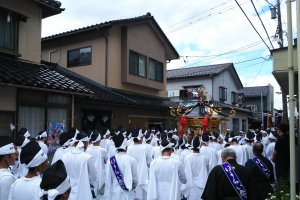 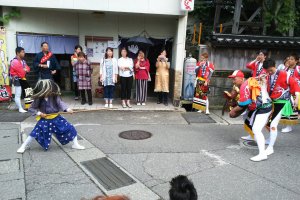 Kim 2 years ago
The amount of history behind many of Japan's festivals is so impressive!
Reply Show all 0 replies

Elena Lisina 2 years ago
Looks interesting as all festivals in Japan!
Reply Show all 0 replies
4 comments in total