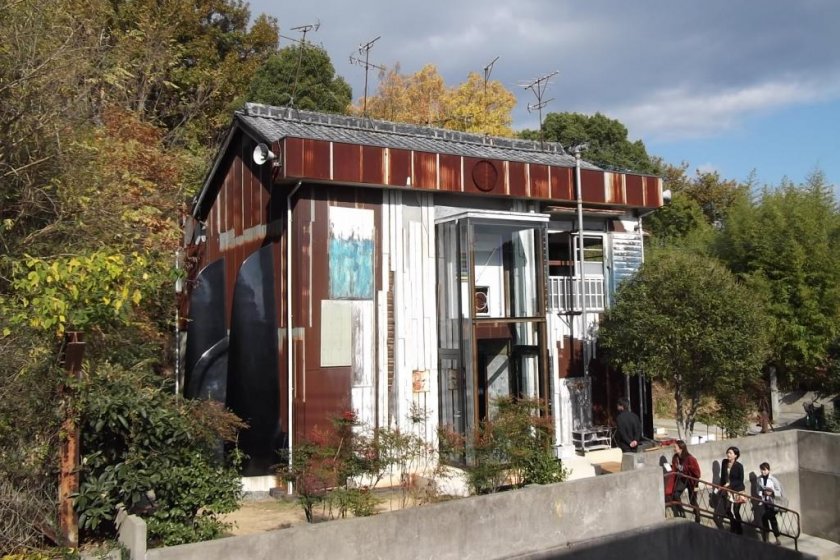 Haisha from across the road

In the Inland Sea between Okayama Prefecture and Shikoku, the small island of Naoshima is also known as Benesse Art Island, for the various museums and artworks to be found there. One of the most interesting things to see is the Art House Project, an ongoing project where old buildings in Honmura Village on the island's east coast are renovated and given over to architects and artists to be transformed into walk-in life-size artworks.

A good place to start is the Project Lounge and Archive in the middle of Honmura village. Here you can get tickets, maps and information about the Project, browse a small selection of souvenirs, or relax with a drink from one of the vending machines. I was able to visit six of the houses; the seventh, Kinza, was already completely booked up for the day when I arrived, and the staff at the lounge advised me first to go to Minamidera to make a reservation there. (These are the only two for which reservations are needed; the ¥1000 day ticket, which doesn't include Kinza, allows you to go in and out of the others at any time.)

I had some time before my slot at Minamidera, so I went first to Gokaisho, which proved a restful introduction to the Project. As I went through the gate I was greeted by a friendly attendant, who gave me a brief explanation of the gravel garden, and the carved wooden flowers in the tatami cabins near the entrance. The aesthetic here is minimal, in characteristic tranquil Japanese style, but not everything is what it seems.

From here I went to the polar opposite at Haisha, which seems like a house on which a gang of artistically inclined vandals have been let loose and allowed to run amok. From the outside it looks like something out of a steampunk graphic novel, a ramshackle construction of glass, rust and little neon lights; inside there are glass floors with a range of detritus scattered underneath, a couple of dark painted rooms with hollows to skulk in and a plate-metal ship on one of the walls, then round the corner there's a big plastic Statue of Liberty. Going up the rickety steps allows you to look down and do some people-watching, or get a close-up of the Statue's face and crown. There's fun to be had here both from the details - the cards under the glass floor, the carefully arranged 'disorder' of the paint work - and from the atmosphere like that of a long-abandoned house that used to be lived in by a commune of cyber hippies.

Minamidera was different again; as I arrived the attendants were arranging the line so that we were in two groups of eight people, as only sixteen people can go in at one time. It's a completely immersive experience, as the interior is completely, completely dark, but as my eyes became slowly accustomed to the darkness, a shape appeared at the other side of the room, projected by a row of dim lights shielded from view.

Part of the experience here is the atmosphere, even the anticipation; as I was waiting outside, the previous part of visitors came out, squinting and shielding their eyes. Then inside, the quiet was interrupted only by the shuffling and breathing of the other visitors, which in the absence of light seemed pin-sharp and amplified.

Nearby Kadoya is also about light, but in a different way. In the house there's a shallow pool with a boardwalk and some benches around the edge, and under the water there are a lot of small displays counting up from 0 to 9, cycling round and round forever. They're all different colors, and count at different paces, some very slowly, some too quickly for the individual digits to be discerned; gazing out over the whole pool, the hush in the space and the constant firefly flickering of the displays created a serene, meditative atmosphere.

A short climb up a hill from Kadoya is Go'o Shrine, a working place of worship as well as a work of art. A barrier keeps us off the long rectangle of white stones around the wooden shrine, so visitors can't get near the glass steps under the roof. However, a short walk down to the right brought me to the entrance to a narrow passage, which led to a chamber directly under the shrine, illuminated by the sunlight filtering down through the bottom step. Coming back out through the passage I had a constricted view of the ocean, as if through a large vertical letter-box.

I came last to Ishibashi, which I imagine hasn't changed much from its original structure, with its simple architecture and peaceful garden. Pride of place here goes to a large, broad waterfall painting by Hiroshi Senju, taking up an entire wall, and reflected deeply in the polished wooden floor. The simplicity of the picture and its reflection and the uncluttered space create a soothing air, and I enjoyed a few quiet minutes sitting on the floor, breathing deeply and letting the stillness take hold. 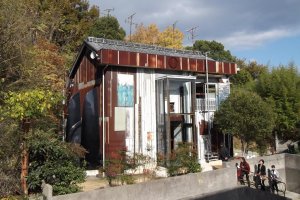 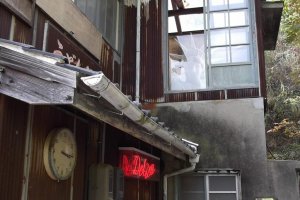 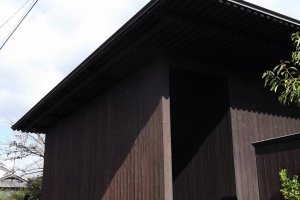 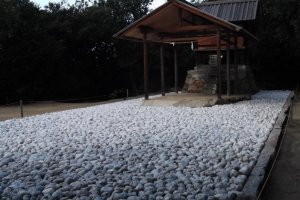 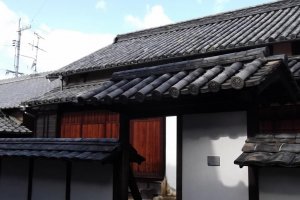 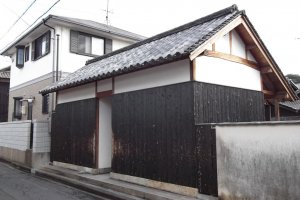