Naoshima is an island in the Kagawa Prefecture that is well known for its art museums, giving it the moniker of "art island." The island is not too big, but the best transportation would be the bus system, as walking on foot would be strenuous in the summer heat and hilly terrain. The easiest way to get to Naoshima is by ferry from Uno Port, which can be reached from Okayama station.

Naoshima is not only famous for its art, but also for its local delicacies. The island is known for salt harvesting, and so you can find multiple stores selling packaged salt collected locally. The brand sold at the port is called "Solashio". To market its salt products, Naoshima also has a famous "Shio," or salt, cider. The soda tastes faintly of Ramune and Sprite, with a lick of salt.

At first taste, it feels as if you have licked a few particles of salt, but as you take more and more sips, you will feel the sweet, tasty flavor tickle your tongue as the carbonation dances around. The soft taste of salt is refreshing, offering you a new sensory experience, as you fight the heat by hydrating yourself. The salt will help prevent dehydration even more so than water, as the salt in the drink has similar properties to Ion drinks, which usually have extra sodium added!

The cider tastes best cold, so make sure to grab a refrigerated one if possible. Drop by the Naoshima merchandise store (Naoshima Marine Station) right at Miyanoura Port to try it. Either pick it up before heading over to the art museums, or grab a bottle for the return ferry ride. Feel free to buy a bottle or two as unique gifts or souvenirs for friends back home, as the bottles are quite small and easy to pack. The bottles themselves are beautifully decorated too, and make great vases for flowers. You may even want to display them in your display case back home.

Don't forget to check out the Red Pumpkin Sculpture right by the port (by Yayoi Kusama) as well before you depart. 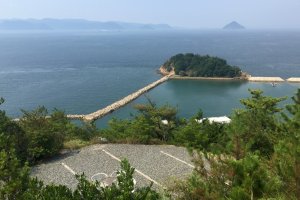 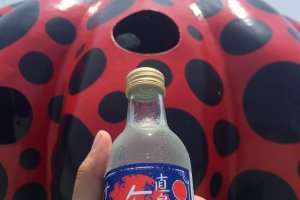 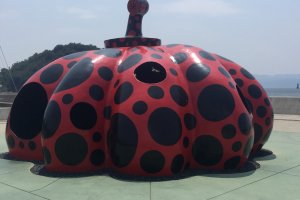