If you travel to the art island of Naoshima, chances are you'll end up passing through Miyanoura, the main town and port on the island. It's not that big and doesn't really have any sights of its own other than the fun 007 Museum, but it's a good base for exploring the island, and has a handful of places to stay and eat. You can do both at Little Plum, a pleasant little cafe/bar where I went one evening for dinner, just round the corner from the I Luv Yu art onsen.

The interior was pretty cosy, with simple fittings and modern art prints sited on the walls among the scores of little photographs of customers; in keeping with the nature of the island, one wall is taken up by a big trompe-l'oeil painting of Mount Fuji as seen through a window. The soundtrack was very mellow reggae and dub, and the staff were as relaxed and friendly as the overall atmosphere. For my dinner I chose the house special dry curry for ¥​750, a good choice that was tasty and filling, nice and fragrant without being burningly hot.

Other than my curry, the menu (which they have in English) includes rice dishes such as jambalaya or a variety of pilafs for around ¥500 or ¥600. If you want some nibbles to share with friends, there are snacks and side dishes like takowasabi (octopus in horseradish paste, which is much better than it sounds) and some salads and tofu dishes; there are also some tapas style dishes, among them fried chicken, octopus or squid, and a selection of omelets and tempura.

If you're there for an afternoon snack, or if you want dessert after a meal, for between ¥300 and ¥400 there are a variety of cakes (including baked cheesecake, banana tart and chocolate gateau), ice cream flavours (green tea, banana, sesame) and other sweets such as affogato and espresso tiramisu.

By way of drinks, there are soft drinks, teas, coffees and a wide range of non-alcoholic cocktails from ¥400 to ¥500, while alcoholic drinks are a little more expensive. These include beer, shochu, sake and the Okinawan spirit awamori, and a cocktail list which is mostly standard, but also has more exotic concoctions made with banana liqueur or yoghurt liqueur.

Little Plum can also meet needs other than hunger and thirst; they offer dormitory accommodation for around ¥3000 a night, and for exploring the island in a leisurely way, you can rent colourful bicycles for either ¥500 or ¥1500 a day, depending on what kind of bike you go for. That'll be a good way to burn off the calories after a meal or a few drinks at Little Plum. 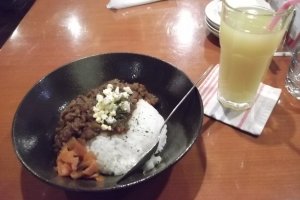 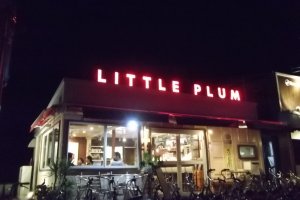 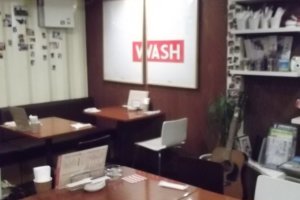