Is it incongruous to imagine shelves of Japanese chips and candy in an “American” themed store? After all, what could be more Japanese than Calbee chips and Choco balls? Ah, now the penny has dropped. What Japanese called “American”, may be more about American influences, rather than American products. Perhaps this store is a microcosm of modern Japan, one that equally embraces the light hearted fun of Halloween and the contemplation of a tea ceremony.

Ask a Japanese person, especially an older person about Japanese snacks and sweets, chances are they will scramble to tell you about the joys of wagashi confectionery, or sembei rice crackers. Filled with ingredients like sweetened red bean paste or warabi bracken starch, they would recall memories of their first visit to Kyoto’s traditional snack stores in the roaring twenties. Calbee Potato chips and Glico chocolates are in their opinion, definitely “foreign”, even if they are made by companies that are as symbolically Japanese as Glico, whose running man watches over Osaka’s Dotonbori.

A debate on indigenous culinary identity aside, what Okadaya tries to do is to transport the visitor to a time past. Imagine a sixties soda and milk bar, complete with dyed perms and pop candy hues that go hand in hand with sunglasses, such are the flushes of Tangerine and Strawberry Sundae and superflat shapes that screams Andy Warhol and Tadanori Yokoo. It also sells gifts from the Teshima Takoo Museum next door, which can be described as the love child of Pop Art and the rock gardens of Ryoanji. American and Japanese influences collide in kaleidoscope of colours, in a most whimsical manner. It is loud enough to elicit delight and surprise, but in a way that is challenging rather than confronting.

From the outside, Okadaya (literally Okada’s house) looks like a log cabin, with a wooden porch that would not look out of place in a school camp. If you look closely, there is a handwritten sign on the chalkboard whispering “There is soft serve ice cream”. It is like a schoolboy who could not wipe the grin off his face with his contraband. Inside, old Coke bottles and Porky Pig Pez candies vie for your attention. For those with more adult tastes, an Aladdin’s cave of Orion, Asahi and Belgian Rich beer lies just out of reach behind the counter, and if you haven’t noticed already, small tubs of freshly made Teshima Strawberry ice cream are for sale. The owner has a grin that’s like a Cheshire cat, having escaped the corporate life in Tokyo a few years ago, and as luck have it, just before the opening of the Museum that draws an artistic crowd from London to Sydney, being one of the places that he had surfed around the world. The giant Fox wetsuit poster behind him is just begging you to ask him of his aquatic exploits. Be sure to pop in before the sun goes down, and crack open a can or two with Teshima’s biggest grommet. This is the spot for night life, so pull up a milk crate and make yourself at home. 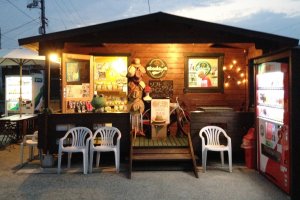 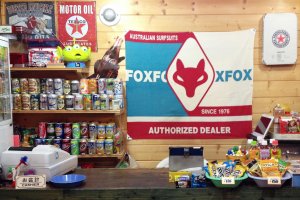 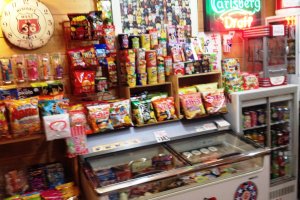