Discover more of the city with the 33-Kannon pilgrimage

As an ancient capital, Kamakura is dotted with temples and shrines. So many are there, however, that most visitors are able to explore just a fraction. Go beyond the usual Kamakura itinerary with the help of the 33-Kannon pilgrimage, one of several spiritual journeys that crisscross the city.

The pilgrimage, which requires several days or multiple trips to the city, will take you to temples both large and small as you gather seal stamps (goshuin) in a special seal-stamp notebook (goshuincho). Along the way, you’ll discover that some of Kamakura’s most spectacular sights remain off the beaten track. You’ll also walk away from your journey with a precious souvenir: your goshuincho filled with artistic calligraphy and vibrant vermillion stamps.

Japan is home to many pilgrimages of various histories and length. Some are ancient and long, like the Shikoku Henro, an 88-temple circuit around the island of Shikoku with roots that stretch back over 1,000 years and a trail that stretches out more than 1,000 kilometers; some are new and short, like the Kamakura-Enoshima Shichifukujin Pilgrimage, which dates to 1982 and takes place within the neighboring cities of Kamakura and Enoshima.

The Kannon pilgrimage, in Kamakura, is part of a larger collection of pilgrimages that can be found across Japan to sites that honor Kannon, the Buddhist deity of compassion (also known as the Goddess of Mercy). Though not the oldest by any stretch—that honor goes to the 1,300-year-old Saigoku Kannon Pilgrimage—the Kamakura pilgrimage, said to be based on an Edo period (1603–1867) pilgrimage, does have old roots. The current circuit dates to the Taisho and Showa periods (Taisho 1912–1926; Showa 1926–1989).

Why 33? Kannon is said to have 33 manifestations, and some pilgrimages do include all 33. Kamakura, however, does not. What the city does have is 33 ancient and celebrated Kannon, and so the pilgrimage will take you to these sites, located at temples across the hill-enclosed area of the city.

Some neighborhoods are home to multiple temples on the route. This makes it a good idea to split up the pilgrimage geographically, focusing on one area at a time. Though order doesn’t matter for the most part, visiting Sugimoto Dera Temple first (officially the first temple on the route) and Engaku-ji Temple last (officially the last) will earn you stamps acknowledging your pilgrimage’s beginning and end. Each stamp seal costs either ¥300 or ¥500, depending on the temple.

*Please note that travel times do not include time spent exploring temples.

In the past, pilgrims walked. Modern-day pilgrims, however, use a variety of transportation methods to travel between pilgrimage sites. As Kamakura is a very walkable city, it is possible to visit all locations on foot. If you’re keen to maximize your time at each temple, however, take a bus from Kamakura Station, terminal five, to the Sugimoto Kannon bus stop to start, and from the Juniso bus stop back to Kamakura Station after visiting Kosoku-ji.

Sugimoto Dera, the oldest temple in Kamakura, is also the first temple on the Bando 33-Kannon pilgrimage which takes pilgrims all across the Kanto region of Japan. As such, quite a few pilgrim specialty items are sold in the temple shop, including a variety of seal-stamp notebooks (¥1,400–¥2,500).

As Sugimoto Dera typically isn’t overwhelmed with guests, pay your respects before choosing a seal-stamp notebook and requesting a seal stamp. Note that paying your respects first is standard pilgrimage etiquette, though busier temples sometimes suggest that you present your seal-stamp notebook first and come back for it after finishing your tour of the temple grounds.

Highlights of the eastern area

With only one major temple in the area, the southeastern section of the city is often left off Kamakura itineraries. As a result, you can wander the streets in relative peace and quiet as you travel from temple to temple.

Komyo-ji is the main draw, and this route leaves it for last. The Jodo sect temple boasts large grounds for a Kamakura temple, impressive gates, a raked garden and a pond where lotus flowers bloom in summer. It is one of the only temples in Kamakura whose main hall can be entered, so be sure to spend some time in the silence of the large tatami room.

The other area temples are small but beautiful, and quite close to each other. Some have limited hours, so keep in mind that you may walk away without a seal stamp. This is true of smaller temples along the rest of the pilgrimage as well. In fact, the Kamakura City Tourist Association suggests that visitors contact Kuhon-ji in advance, so if your Japanese allows, call the temple (0467-22-3404) to request an appointment to receive your seal stamp.

As there isn’t much difference between taking the bus and walking to reach Kofuku-ji, this route is timed to use the bus only to return to Kamakura Station from Komyo-ji. Komyo-ji bus stop is located not far from the entrance to the temple.

Highlights of the southeastern area

The best way to start this section of the pilgrimage is by traveling to Raiko-ji (Nishi-Mikado) by way of Tsurugaoka Hachimangu Shrine. You’ll find the cherry-tree lined approach to the shrine running down the middle of Wakamiyaoji, the city’s main avenue, beginning under a large vermillion torii gate.

Though nine temples in one day sounds like a lot, several of the temples are clustered together and many are quite small. After paying your respects and receiving your seal-stamp notebook, you’ll find there’s nothing left to do but head to the next temple. That being said, it is a full day's worth of exploring.

Jufuku-ji presents a challenge. The temple buildings are not open to the public and receiving a seal stamp requires some bravery to go beyond the “no entry beyond this point” signs. You are allowed as you are on temple business, so take a deep breath and follow the path. It sometimes happens, as with other temples, that seal stamps aren’t available on the day you visit. Another day, another chance. If your Japanese is good, avoid such a scenario by calling in advance using the phone number provided by the Kamakura City Tourist Association (0467-22-6607).

Highlights of the downtown area

The western side of Kamakura can be reached by hopping aboard the Enoden Line, the city’s popular local railway. Since Gokuraku-ji and Joju-in are both quite small, visit them first and save Kotoku-in and Hase Dera for last.

While Kotoku-in is home to the Kamakura Daibutsu (Great Buddha)—who merits unhurried admiration—in addition to a small statue of Kannon, the temple grounds are small and can be enjoyed fairly quickly. Hase Dera, on the other hand, sprawls for a Kamakura temple, and if you thoroughly explore the grounds and visit the on-site museum, expect to spend well over an hour there.

Hase Dera can get very busy, and the temple advises people hand over their seal-stamp notebooks upon arrival rather than paying their respects to Kannon first. By the time you finish exploring, your seal-stamp notebook should be ready, and you can exchange the token you received earlier for your book.

Highlights of the western area

The temples of Kita-Kamakura should be left for last, and of them, Engaku-ji should be saved for very last. All of the temples, except for Kencho-ji, are located in a fairly compact area around Kita-Kamakura Station, so though their grounds are relatively expansive, there isn’t too much walking to do between temples.

Kencho-ji, on the other hand, is located partway between Kita-Kamakura and Kamakura. Though the walk is a little on the long side, you'll receive three different seal stamps there—though not at the same location within the temple. Separate charges apply for each seal stamp.

As the temple complex is large, it can be somewhat confusing to locate the two sub-temples where you need to receive stamps. Temple priests and staff can help you out, showing you on the temple map where to go after you receive your first seal stamp at the main seal-stamp office located near the temple’s Somon gate. Again, you’ll need to pass by “no entry beyond this point” signs, but take heart: By virtue of being on the Kannon pilgrimage, you are allowed past.

At Engaku-ji, you will receive your final seal stamp not at the temple’s main seal-stamp office but rather at Butsunichi-an, a small temple located towards the back of the Engaku-ji grounds. A separate small fee is required to enter in addition to the seal-stamp fee.

Kamakura has so much to offer and deserves more than a quick visit to see the Great Buddha; it should be savored slowly and explored thoroughly. The Kamakura 33-Kannon pilgrimage allows you to do just that. Find joy in the journey and savor the feeling of accomplishment when you receive your final stamp.

Kamakura and Kita-Kamakura can be reached via the JR Yokosuka Line. 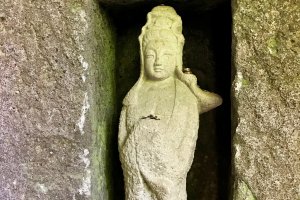 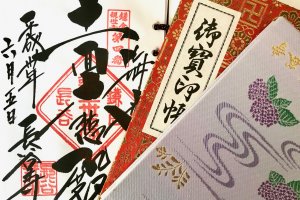 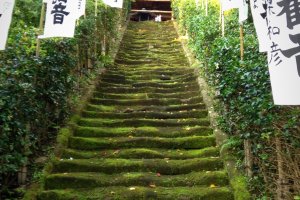 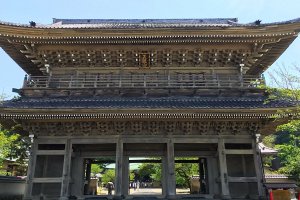 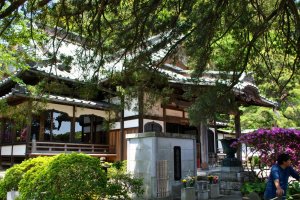 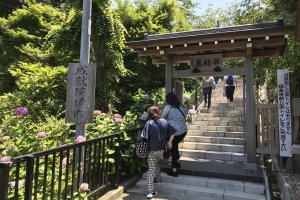 Bonson Lam a year ago
Great insights here and even the stamp books are stunning in themselves.
Reply Show all 0 replies

Sébastien Duval a year ago
Hase-dera and Kencho-ji are my favourites but I see I still have many temples to discover ;) Thanks for this great introduction, Helen!
Reply Show all 0 replies