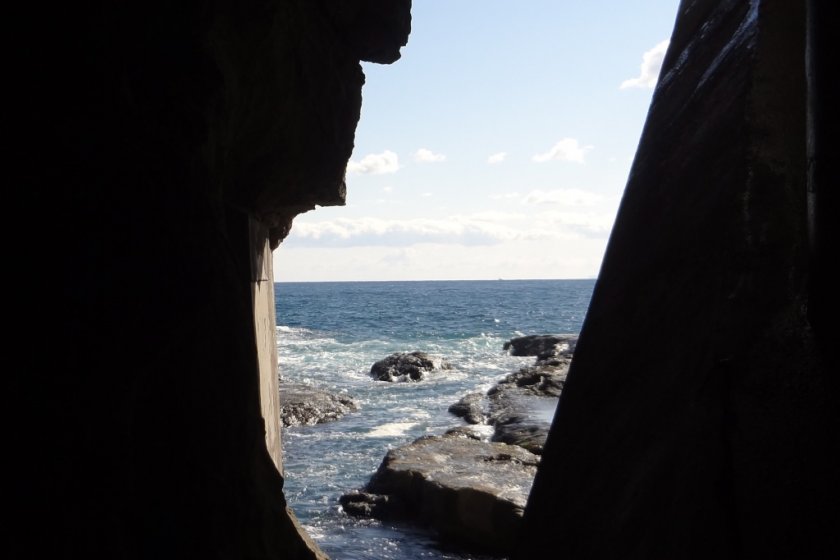 From holy place to tourist spot

View from the caves out to the sea.

Iwaya are caves on Enoshima island which have been eroded by tides for thousands of years and elevated from the sea by repeated earthquakes. The first record of Iwaya in a historical document was in 552 AD. The cave area here has been developed by Fujisawa city as a tourist spot and so has lost its original atmosphere. But even though, you will be impressed by this wonder of nature.

The first foreigner fascinated by Enoshima

One night in 1869, a 28 year-old ambitious businessman was almost shipwrecked near Izu peninsula in a terrible typhoon. The tides carried his steamship to Sagami Bay. The next morning, when the seas had calmed down, he went up on deck to find a stunning view of Enoshima. He, Samuel Cocking (who later succeeded in building a successful trading business between Britain and Japan) was completely carried away by the beauty of the island. It was love at first sight.

His view of Enoshima was of the rock face on the west side of the island. That is where the Iwaya Caves are. Later in life, he and his Japanese wife bought land at the top of Enoshima and built a magnificent cottage and garden.

From holy place to tourist spot

The ancient Kinmei Emperor received an oracle to build a shrine in a cave on Enoshima in 552. After that, many renowned monks such as En-no-ozunu, Kuhkai, En-nin, and Nichiren went and practiced in the caves. And up to the medieval period, influential samurai such as Yoritomo Minamoto and the Hojo family, became worshipers of the God of Enoshima. Until the late Edo period, the entire island was used as a religious sanctuary. But worship travel had become popular and so devotees on pilgrimages started to visit the island; Enoshima suddenly became a hot tourist spot all over Japan. Hiroshige, Hokusai, Toyokuni, and other ukiyoe painters drew Enoshima.

In 1971 there was an accident caused by falling rocks, and so the intricate rocky caves were closed for over 20 years. One of my friends who grew up nearby said that when she was a kid, Iwaya was a scary, forbidden, dangerous place because it was off limits and because of its long history. Only the truly brave among her friends would venture near the caves, but even they would not enter.

In 1993, Fujisawa city repaired and equipped Iwaya perfectly, and the area opened as a tourist spot. The edge of the rocky beach has been covered with concrete, the path to enter the caves was equipped with handrails, lights, panels, stone objects, and plastic models decorate the inner space.

After paying (500 yen) at the entrance gate, turn to the left and go into the first cave (152m long). There are some framed photos and explanation panels here. After you walk two thirds into it, the cave divides into two. The innermost left spot is said to connect directly with the “hole to hell” at Narusawa ice cave near Mt. Fuji. Why don’t you try feeling the piercing, icy wind from here? Next, come back to the gallery, go straight and turn left again. You can enjoy crossing a well-made pedestrian overpass leading to the second cave. To tell the truth, I liked this overpass much more than the cave itself. Being exposed to the sea breeze, I felt I was being cleansed and purified.

If you come to Enoshima, don’t miss the Iwaya caves. Not because of adventurous excitement, but because of its mystic charm. 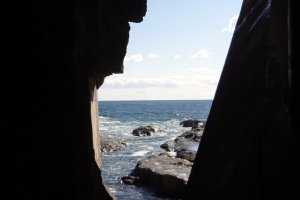 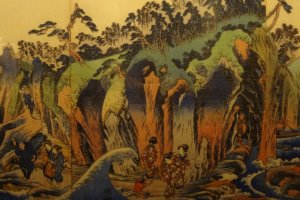 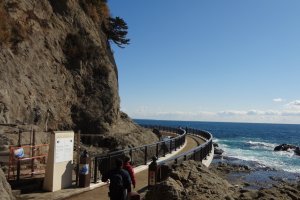 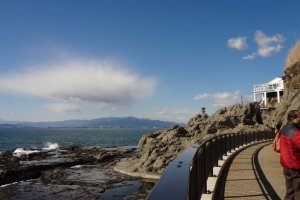 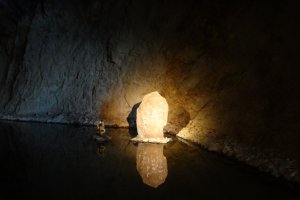 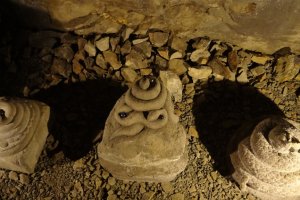 Elena Lisina a year ago
It's interesting because in Japan nature is sacred, but not something usual and taken for granted!
Reply Show all 2 replies

Sleiman Azizi a year ago
That kind of thinking has a lot of appeal to me. We recently visited Enoshima but were unable to go and see the caves. Perhaps next time...
Reply

Elena Lisina a year ago
Why not? Were they closed?
Reply

nylover 9 years ago
Enoshima seems like a place I would like to live! Is that possible? Do people actually live on the island? Is it beautiful year round? It certainly seems interesting. And the history...!
Reply Show all 0 replies
4 comments in total