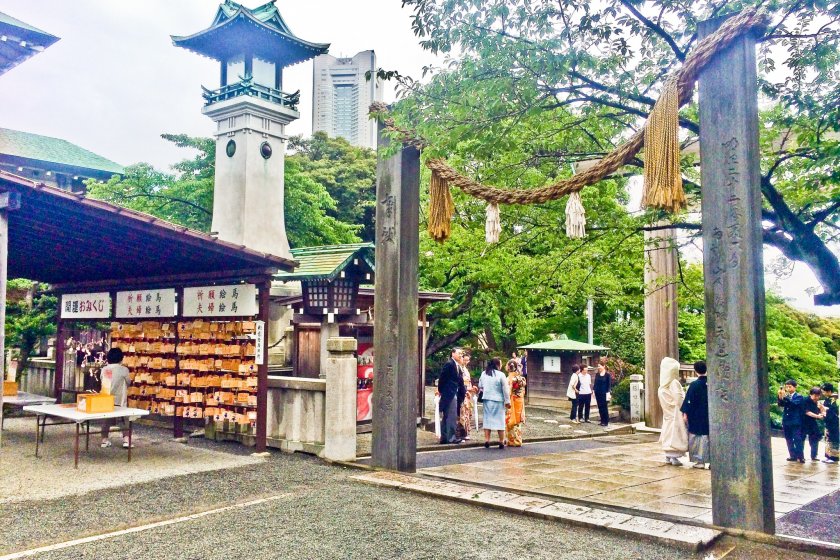 An impressive Shrine with more than meets the eye

A backward glimpse of Yokohama Landmark Tower in the distance

Perched peacefully on a hilltop overlooking Yokohama’s modern Minato Mirai district is Iseyama Kotai, an impressive Shrine which despite its large size is almost invisible from below if not for a very distinctive ‘torii’ (gate).

When walking up the main staircase you will notice several stone tablets, wooden lanterns and numerous inscriptions immaculately carved into each stone pillar. Fortunately on this occasion, there were many colorful hydrangeas planted around this section making everything look even more colorful and vibrant.

Upon reaching the top you will pass under a large ‘torii’ marking the entrance to this shrine; giving you your first real chance to gauge its surprisingly spacious layout.

Situated directly in front of you is a wide open area where the main shrine is set back several meters. To the left of this are some ‘mini shrines’, partially obscured by several large weeping willow trees. Whether planted here intentionally or not, the rich green tones emanating from these trees contrasts perfectly with the surrounding landscape.

When walking around, you will notice a section towards your right containing many ‘ema’ (wooden tablets), used for praying. Unsurprisingly, Iseyama Kotai is a popular place for locals to visit during New Year's Eve and New Year's Day. On these days it can get extremely crowded, taking several hours just to reach the main shrine from the bottom of the staircase!

Fortunately, on most weekdays however, there are few people around, making this a good place to relax whilst admiring the impressive views of Yokohama Landmark Tower.

On this particular occasion I was lucky enough to encounter something unexpected but very pleasant.

Gathered around the main gate was a small group of smartly dressed men in black suits along with several women wearing some very beautifully colored kimonos. What I was experiencing was a traditional Shinto-style wedding ceremony; characterized by the bride wearing a very distinctive ‘Shiro-Kakeshita Kimono’, (a bright white kimono).

Recently, traditional Shinto-style weddings are seeing something of a boom in Japan, making places like Iseyama Kotai very popular at certain times.

Despite this shrine's traditional appearance, it will probably come as a surprise to learn that it was only built as recently as 1870.

The reason for this can be illustrated when looking at the opening of Yokohama Port to international trade in 1859. During this period, the Meiji Government feared the spread of western influences in Japan. In particular, they feared something which every previous Japanese government has feared for the last five centuries; Christianity.

Viewed as an “evil and infectious foreign disease”, Japan has had a history of trying to brutally eradicate this religion, reaching a crescendo in 1614 when Christianity was officially banned throughout the country.

However, under new powers guaranteed to Christian priests in the 19th century following the opening up of Yokohama Port, Christianity was able to naturally flourish with a freedom previously unheard of.

Predictably, to counter this growing influence, the Meiji Government promoted Shintoism as the national religion, constructing many new shrines like Iseyama Kotai. Interestingly, it’s probably not surprising to learn that the Shinto sun goddess, ‘Amaterasu-Omikami’; (proclaimed to be the guardian deity of Yokohama and believed to have descended from the Imperial Family); is officially enshrined at Iseyama Kotai.

Elements of Iseyama Kotai's history can be seen when looking around at several statues that depict this god.

When you are ready to leave be sure to do so by the official exit, a staircase located to the right of the wooden tablets.

At first glance, from the top of the gate it looks like a simple straight walk down the bottom. However, as you reach the halfway point you will notice several beautifully carved stone statues along with a little garden to your left. Although you cannot enter, it is definitely worth spending several moments admiring its pretty interior.

When reaching the bottom of the staircase don't forget to have one last look back. When doing so, you will probably notice how ordinary this shrine looks from the bottom. Perhaps this is one of Iseyama Kotai’s key points; the fact that its real beauty can only be seen by those who enter.

Despite being only about a 10 minute walk from Sakuragicho Station, Iseyama Kotai can be an unusually difficult place to find without a map. The best option would be to visit any tourist Information Center in Yokohama which should be able to print you a copy of a map. Directions can also be found on the official website at www.iseyama.jp/ 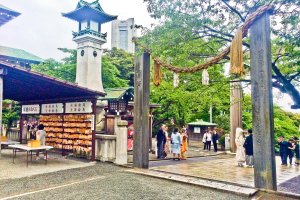 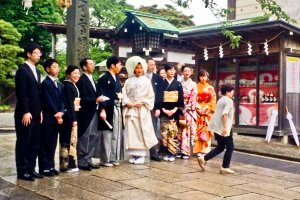 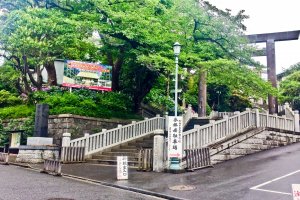 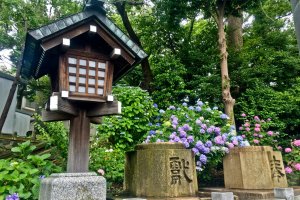 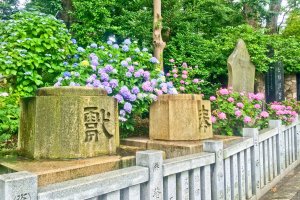 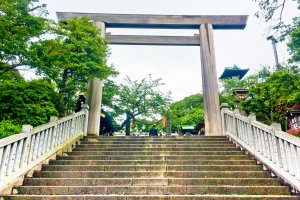