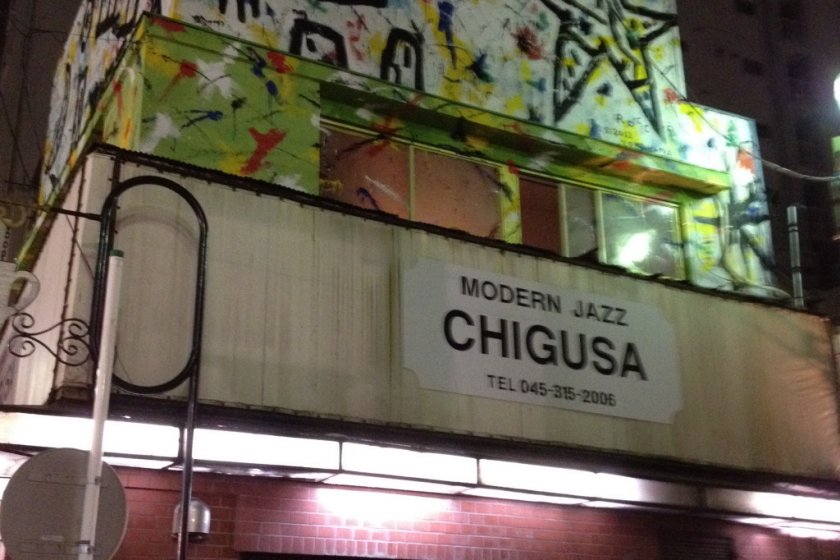 A jazz vinyl lover’s mecca in the heart of Noge.

In my opinion, we couldn’t have picked a better day than International Record Store Day to make the pilgrimage to Noge’s Chigusa Jazu Kissa (Jazz Café) to listen to recorded jazz as the Buddha intended it- on vinyl! We had walked by here on a previous night in Noge and I was floored by the sight of huge sturdy shelves packed with a lifetime’s record collection, and what appeared to be a stunning sound system with two gorgeous built in turntables, and I made a mental note that night to return to spend some time in this temple of sound.

In Noge, the lights are softer, and the city noises fade. We felt an ethereal dream like quality as we approached Chigusa. The building itself is beautiful with sturdy brickwork, and the second story murals are painted in an abstract impressionistic style. As we peered in the windows, we caught a mellow scene with faint trembles vibrating the very ground beneath our feet. This is not an uncommon sensation in urban Japan with the trains, subways, and frequent seismic activity, but tonight the rumbles were bass notes magically transmitted from groove to needle through amplifiers and speakers so massive that they would make the Daibutsu himself proud. We eased our way into the comfortable space and took our seats as a clean, rich, deep ocean of sound began to wash over us. By no means do I mean to imply that the music is too loud. The tones are rich and fill the room, but my date and I were able to have a pleasant, quiet conversation while being serenaded by smooth melodies, and heart-synced rhythms.

Chigusa originally opened in 1933 by Mamoru Yoshida with about a hundred 78s and an old gramophone. Yoshida was a early Japanese fan and ambassador of jazz to Yokohama. His record collection grew considerably until he was drafted to fight in the war in 1942. Like many other losses during the war, the café and all of Yoshida’s records were destroyed in a US bombing raid in 1945. After the war, Yoshida began to rebuild his collection, and during the Allied occupation, as live Jazz venues began to thrive in Yokohama, Yoshida was able to renew his record collection by obtaining disks on US labels available to servicemen. Chigusa became a hub of the Yokohama Jazz scene, and many Japanese Jazz musicians would frequent there to learn the tunes and techniques of the masters by listening to records in the café.

Yoshida died in 1994 at the age of 81, and the café carried on for several more years under the management of his sister. Eventually, the business succumbed to property developers and closed in 2007. Members of the Chigusa Kai (Chigusa Association), headed by Masataka Yusa worked to resurrect the café and with the support of neighboring businesses and the City of Yokohama, just recently reopened on March 11, 2012, a day of obvious significance for the nation, and an auspicious day to reopen such a cultural landmark.

As my date and I were looking at my Record Store Day purchases, the DJ/maitre d’, Yusa-san, came over and offered to play one of my records. As I feared the howling yodels from the Pharoah Sanders disk would be too off the wall for the café’s mellow ambiance, I selected some Lester Young from their vast catalogue to keep the vibe chill. As the evening wound down after some nice conversations with Yusa and his friendly and French educated co-host Fumiko-san, it was nearly time to leave. An elegant young woman with a wistful air about her selected some Chet Baker. As Come Rain or Come Shine smoothed out the room, my date and I felt good as I squeezed her hand and we floated off through the mist of another dreamy night in Noge.

Chigusa is as much a museum of Jazz wax as it is a café. The record collection is vast in scope and includes jazz classics from the 30s and 40s, be-bop, bossanova, big band swing, and more. Japanese musicians are well represented in the catalogue, and patrons are encouraged to request records from the well organized catalogue.

They serve coffee, soda, beer, whiskey, shochu, and juice, all for 500 JPY. There is seating for about 18 people, and the ambiance is warm and friendly. They are open daily from 6 to 10 PM.

You can’t miss Jazu Kissa Chigusa: Follow the map, then just keep your eyes open for the second story murals, and your feet tuned for the deep rumbles of the sound system. 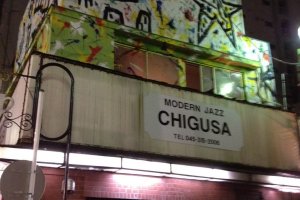 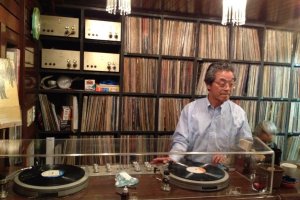 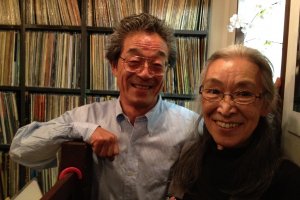