A shrine built in a quiet residential area in Kamata

Built in 1951, Keihin Fushimi Inari Shrine is located in a quiet neighbourhood in Kamata, Kawasaki. It was founded soon after the second world war as a source of revival for Kawasaki, particularly Kamata residents.

The main shrine is overflowing with 108 statues of foxes, kitsune in Japanese. In Japan, the Inari (a Shinto spirit) worship is commonly associated with foxes. Since ancient times, Inari have been seen as the deity for rice. The foxes were believed to be the protectors of rice, a valuable food for Japanese. It is also a kami (or god) of agriculture and prosperity.

The foxes in the shrine are all different in form. They all have different poses, and even vary in color. What's interesting for visitors is trying to guess what the foxes are doing. Besides the main shrine and its foxes, there's a small replica of Mount Fuji replica with lava flowing down its sides in one section of the shrine. There are many smaller shrines that serve different purposes. One is believed to fulfill wishes related to education.

Similar to its famous counterpart, Fushimi Inari Taisha in Kyoto, this shrine also has red torii gates, with a larger one at the entrance guarded by two foxes at the side. In fact, it was modeled after the grand shrine. There is a small pond that was made to resemble Lake Biwa and another area where you can purify yourself as well as getting a prediction of your fortune. Near the main shrine, you can also have a go at seeing your fortune; if you receive a bad one, tie it so that you will leave it behind, while for good fortune, keep it with you.

Besides its size, the biggest difference between this shrine and its counterpart in Kyoto is also that it's away from the crowd, a much peaceful experience. In fact, the shrine is a little bit secluded and nestled in the middle of a quiet residential neighbourhood, so much so that it's easy to miss it. 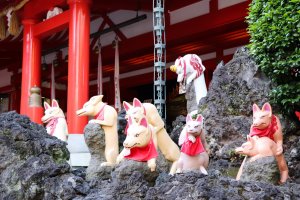 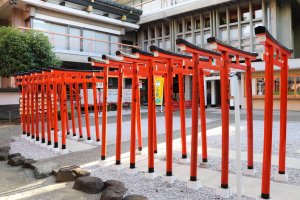 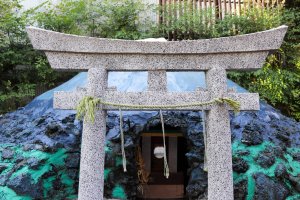 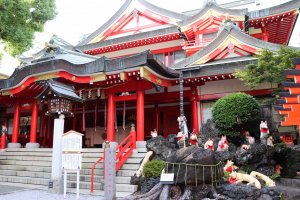 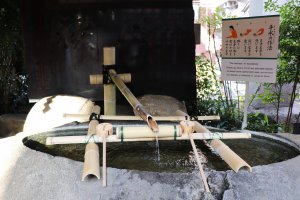 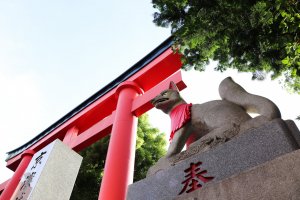 Elena Lisina a year ago
Kitsune figures are quite unique. Inari shrines are my favorites!
Reply Show all 0 replies

Kim 2 years ago
I love that all the fox statues have a unique pose - very clever!
Reply Show all 0 replies
2 comments in total