In the little town of Toyo, in Kochi Prefecture, a local women’s group is making sure that their 130-year tradition of kokera zushi doesn’t die out.

This impressive regional specialty can best be described as a layered “sushi cake,” which is shaped and pressed in large, specially-made wooden boxes.

The rice is mixed with juice from yuzu (a small, tart citrus fruit grown in Kochi Prefecture) and flaked fish, usually mackerel. Using a thick layer of rice as a base, the cook then carefully arranges thinly sliced omelette, shiitake mushrooms, carrots, and fluffy green carrots tops on top, creating a colorful mosaic. Once satisfied with the arrangement, a thin wooden board is placed on top, and the process is repeated for as many layers as needed. Finally, a heavy wooden cover and weights are used to press the sushi for a couple hours.

When complete, the large sheets of pressed edible art are sliced into manageable rectangular slices, and served to appreciative diners.

While sushi is now considered Japan’s most iconic food, there was once a time when rice was precious and expensive, and so was only served in large quantities for very special occasions. As such, kokera zushi was an important part of celebrating important festivals and events in Toyo, a treat people looked forward to.

While it is still features in celebrations in the town, due to the time consuming nature of the preparation, layering and pressing process, the number of people able (and willing) to make it started dwindling. In 2018 the locals created a group to preserve the tradition, share information about kokera zushi with the world and hold workshops for those interested in learning how to make the dish.

The friendly grandmas who run None Kitchen, a small eatery in Toyo, are at the forefront of this effort. Instead of reserving the tasty sushi cake for special occasions, they now make it every Saturday, and people come from all around to buy packs of the colorful dish.

Kokera zushi also appears to be popular among the pilgrims walking the long Shikoku 88 Temple Pilgrimage around the island. They can be seen stopping by for the breakfast “morning set” from 9:00 a.m. to noon on Saturdays to fuel up for the long walk ahead of them.

If you want to try the delicious sushi cake, it is best to go early on Saturday morning, as they often sell out. The group also offers classes for those who want to learn how to make kokera zushi.

Toyo is in the eastern part of Kochi, not far from the border with Tokushima. Using a car to get around this area is ideal, however there is a station (Kannon-Ura) station about 6 kilometers away. Buses bound for Muroto also often stop in None, not far from the restaurant. 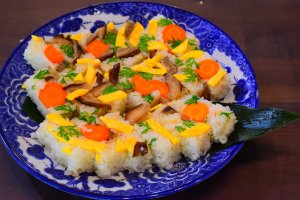 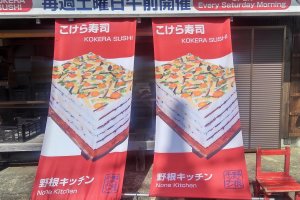 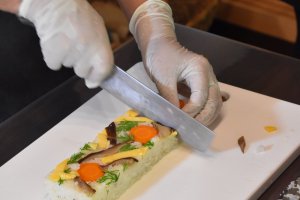 Lynda Hogan 2 years ago
What a great idea. This could certainly catch on.
Reply Show all 0 replies

Sherilyn Siy 2 years ago
I've had a 3 layered one gifted to my son. A visual treat as much as an edidble one.
Reply Show all 0 replies

Sleiman Azizi 2 years ago
This is a great initiative! Hope it grows even further.
Reply Show all 0 replies
4 comments in total