The Frog Shrine of Tosa

A must-see if you love all things froggy and green

This little shrine in Tosa City, Kochi Prefecture is a real hidden gem. Don't be taken in by the standard facade and stone torii as the secret of the shrine only reveals itself once you pass beneath its gate!

Nestled by the Niyodo River, people with skin ailments come from near and far to pray here, and leave a frog-themed gift for the god. The shrine dates back to 1899, when a local farmer came across a tiny shrine in his field after a typhoon. He dug it up, took it home and placed it under the eaves of his kura (storehouse). Suddenly his family started suffering from warts and other unpleasant skin ailments. Distraught, the farmer sought counsel from a Shinto priest, and was told that the god in the small shrine wished to be placed somewhere else.

The farmer took this advice to heart, and in 1901 built a shrine for the sacred object. Once the new building was complete, the family's warts and skin issues miraculously cleared up! The enshrined god became known as a curer of warts and other skin problems, and now those in search of a cure visit from across the country.

Grateful visitors began leaving frog-themed gifts to the god, likely inspired by the amphibian's wart-like skin. The sheer number of frog statues, stuffed animals, frogs from anime/manga, and green figurines stuffed into every corner of the shrine must mean that there are a lot of happy, wart-free people.

Frog-lovers (and wart-suffers) alike can stop by on their way to the Niyodo River, or during a visit to see the hydrangeas nearby in the town of Haruno. The shrine is about a 30 minute drive from central Kochi City. For those without cars, there are some buses that run to Haruno as well.

The shrine is about a 30 minute drive from central Kochi City. There are some buses that run to the nearby town of Haruno as well. 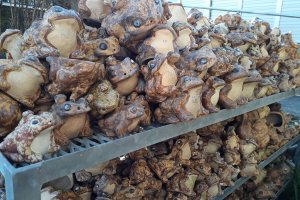 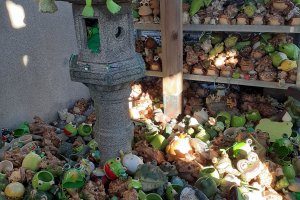 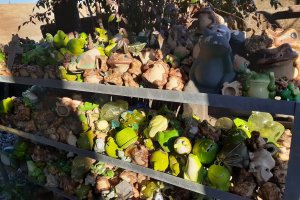 Elizabeth S 11 months ago
Ah, medicinal frogs! At Tsukuba Mountain in Ibaraki Prefecture, there is a tradition of toad oil salesmen in Edo period costume. Toad oil was a cure-all often used for skin ailments.
Reply Show all 0 replies

Terrie Lloyd 11 months ago
Great find! I've been to Kochi more than 20 times, but I've never heard of this shrine until now.
Reply Show all 0 replies

Lynda Hogan 11 months ago
Oh wow, looks amazing. Would love to check it out.
Reply Show all 0 replies

Sleiman Azizi 11 months ago
I love that cover photo. There are so many stories like this all around Japan. Would love to read more of them!
Reply Show all 0 replies
5 comments in total