A mix of history and the outdoors in central Kumamoto

For several centuries, the Hosokawa family ruled the province of Higo (now present-day Kumamoto prefecture). Though their residence was up near Kumamoto Castle, the family maintained a shrine and burial area just behind what is now Kumamoto University. While visiting a burial ground may sound morbid, the land here has been converted to a nature park as well and makes for a surprisingly rural getaway in the center of Kumamoto city.

The nature park was once the location of the Hosokawa family shrine. The 3rd Hosokawa lord had it constructed to honor his two predecessors and their tombs are adjacent to the shrine's small main hall. The Lady Garcia Hosokawa, wife to the 2nd lord and a confirmed Christian, is also buried here and her interesting story is told in detail on the English leaflet. Apparently, she chose suicide over the threat of being used as a hostage and a pawn during the Warring States period. The tenth through fifteenth lords of the dynasty also have tombs on the property.

Down by the park's pond, visitors can peer over the bamboo fence at Tadaoki (lord #2) Hosokawa's tea ceremony room. Built to resemble the tea room at the Tenryuji Temple in Kyoto's Arashiyama district, the small building here still maintains a thatched roof. The lantern and stone wash basin found just outside are originals and allegedly favorite possessions of Tadaoki, who was considered an accomplished tea master. The site is mostly off limits due to the delicate moss garden that surrounds the buildings, but it's easy to take pictures over the low bamboo enclosure.

Several hiking trails crisscross the property, though none are very long at all. This is an excellent park to visit with children as the trails promise little elevation and most loop around the pond, which is home to numerous waterfowl.

The park is known as one of Kumamoto's top foliage spots and a number of maple trees ring the pond. Late November is the best time to come to see the foliage at its best.

A rather large parking area (free) sits just outside the park. For those who prefer public transportation, the nearest stop is in front of Kumamoto University. Turn left on the road that runs along the campus' eastern side and walk straight back to the mountains, following the signs. 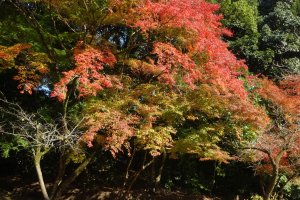 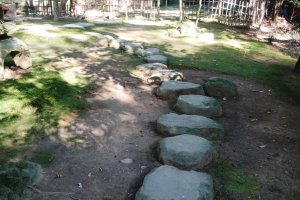 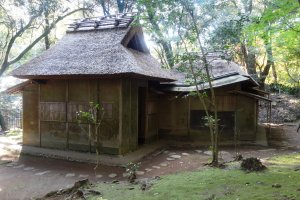